→ The icoation of the substituent in the substituted aldehyde is indicated by greek letters α, β, γ, δ etc. The carbon directly linked to aldehyde group (—CHO) is termed as a, the next carbon as to f3 and so on

→ The simplest aromatic aldehyde is benzaldehyde. In case of substituted aromatic aldehyde, the positions of the substituent in benzene ring with respect to —CHO group are indicated by suffixes ortho or o- (for 1, 2), mcta or m (for 1, 3) para or p- (for 1, 4). Many aldehyde are also known by their specific name. Examples: 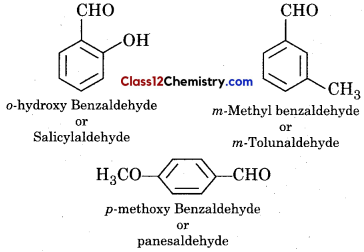 → IUPAC System : In IUPAC system the aldehydes are known as alkanal. The name of aldehyde is derived by replacing the terminal ‘—e’ of the name of corresponding alkane by ‘al’. The position of substituents in the longest carbon chain is indicated by 1, 2, 3, … etc. and then write their prefix for writing IUPAC name.

→ If more than one substituents are present then write them in alphabetical order with their numbering. The parent chain is numbered in such a way that the aldehydic group (—CHO) gets lowest number i.e., 1.

→ When aldehyde group is directly attach to ring then carbaidhyde is added to full name of corresponding hydrocarbon. TableI2.1 Common and IUPAC Names of Aldehydes 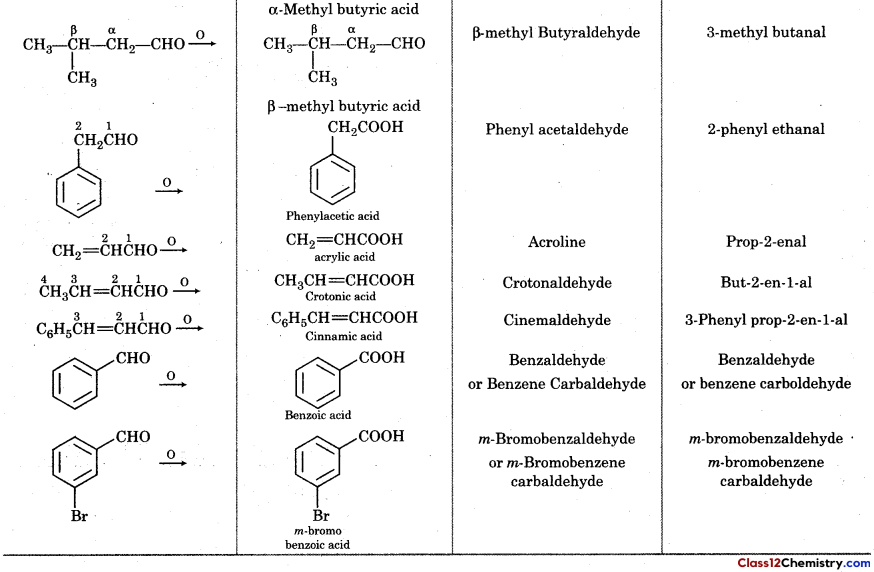 → Position of substituent in substituted ketone is indecated by greek letters α, β, γ, … etc. The carbon atom attach to ketonic carbonyl group is termed as a and next to it is termed as and so on.

→ Some ketones have historical common name.

Example : Simplest dimethyl ketone is called acetone. Some aromatic ketone in which carbonyl group is directly attach to benzene ring is called phenones. 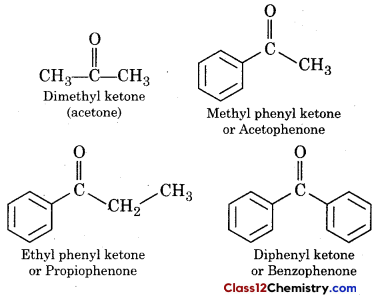 → IUPAC System : In IUPAC system ketones are called alkanone. The name of ketone is given by relpacing ‘e’ of the name of corresponding alkane by ‘one’.

→ If carbonyl group have two or more keto group then ‘e’ is not replaced from the name of corresponding alkane and position of substituents on parent chain are indicated by numbers and before the ‘one’ suffix, numbering prefix di, tri etc, are used.

→ Prefix ‘oxo’ is used for keto group in ketoaldehyde and position of it at parent chain is indicated by suitable numbers. The common and IUPAC name of some ketones are given in the table: 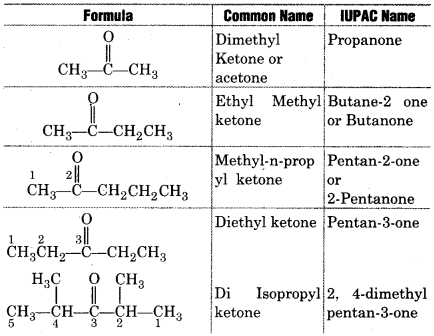 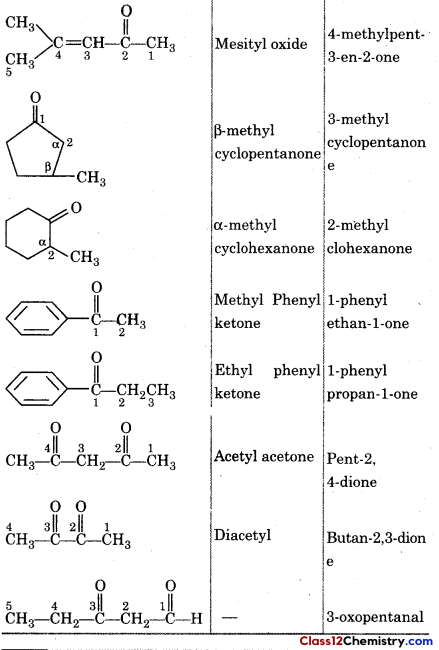