Chemical in Food Preparation and Properties

Chemicals are added to food for their preservation, enhancing their appeal and adding nutritive value in them. Main categories of food additives are as follows:

→ These are the chemical substances added to food to prevent their spoilage due to microbial growth (Bacteria, Yeasts and Moulds) and to retain their nutritive value for longer periods.

→ Thus, those chemical substances which prevents the spoilage of food done by bacteria and thereby destroy them are known as food preservatives.

An artificial preservatives should have the following characteristics :

Following chemicals are used as preservatives.

→ Sodium Benzoate : This is the most commonly used preservative. Its 0.06% to 0.1% solution is used as preservative in fruit juices. jam, jelly, pickels etc.

→ Parabean : It is parahydroxy benzoate. It is used in preservation of tomato, puree and sauce.

→ Propionates : These are ethyl and phenyl esters of propionic acid. They are used to preserve papadum and biscuits etc.

→ Saccharin : Saceharin discovered by Johns Hopkins in 1879 (University of USA). It is the most popular artificial sweetener, it is 600 times as sweet as cane sugar. It is insoluble in water, but its Sodium salt is soluble in water. So, it is sold in the market as its soluble sodium salt. It is non-biodegradable so excreted from the body in urine (unchanged). Its use is of great value for diabetic persons and people who need to control intake of calories. 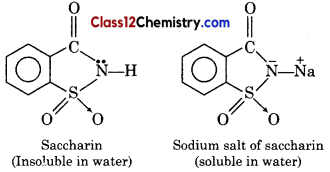 Some of the artificial sweeteners used commercially are given in table below: 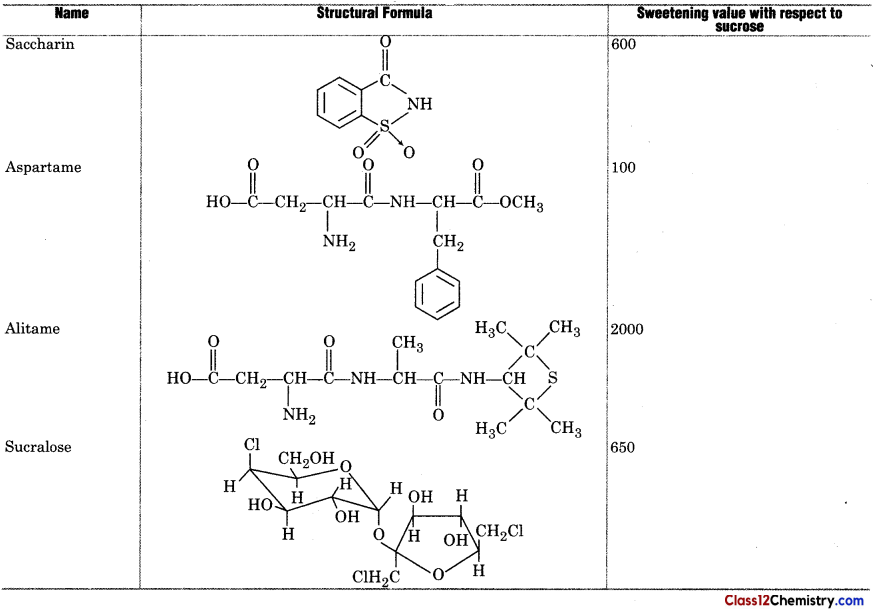 A substance that inhibits oxidation, especially one used to counteract the deterioration of stored food products is called anti-oxidant. These are active towards oxygen. These destroy themselves and prevent food spoilage. Its structure can be given as: