The various types of catalysts are as follows:

→ In presence of positive catalyst, the value of activation energy decreases hence the rate of reaction increases.

→ In presence of negative catalyst, the value of activation energy increases hence the rate of reaction decreases.

→ Auto Catalyst: During a chemical reaction, when one of the products formed behave as a catalyst and increases the rate of reaction then such catalyst is known as auto catalyst and the phenomenon is known as autocatalysis. Example :
→ The hydrolysis of ester is slow in the begining but becomes fast after some times because acetic acid formed during the hydrolysis of ester behave as auto catalyst in this reaction.

→ During the oxidation of oxalic acid by acidified potassium permanganate, manganese ions (Mn2+) are formed. This manganese ions behave as autocatalyst. As soon as Mn2+ ions formed, the rate of reaction increases.

Generally catalysis are of two types :

Here all the substances are in the liquid phase.

Here all the substances are in same phase.

→ If the catalyst is not present in same phase as reactants and products in a chemical reaction then this type of catalysis is called heterogeneous catalysis.

Example :
Oxidation of SO2 : Oxidation of so, into SO3 in presence of Pt catalyst is an example of heterogeneous catalysis.

→ Haber’s Process : In this process, finely divided Fe is used as catalyst to produce ammonia from nitrogen and hydrogen gas.

→ Here all the reactants and products are in gas phase while catalyst iron is in solid phase.

→ Ostwald’s Process : In this process, oxidation of ammonia into nitric oxide takes place in presence of platinum gauze.

Mechanism of catalysis are as follows:

Low activation energy is required in the formation of intermediate AX. The reaction takes place at fast rate. Example: 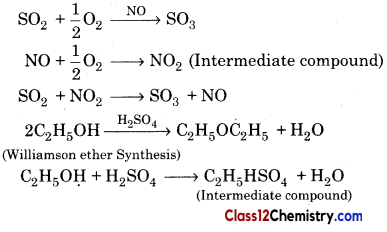 Following facts can not be explained by intermediate compound theory:

Following points can be explained by this theory :

Points to be remember :

→ Catalysis Promoters : The substances which can increase the efficiency of catalyst but themselves are not catalyst are known as catalytic promoters or activators.

→ In Haber’s process, for the synthesis of ammonia, iron powder behaves as catalyst but traces of molybdenum increases the activity of this catalyst. Hence Mo is catalytic promoter.

In the hydrogenation of vegetable oil, the activity of nickel catalyst can be increased by adding small amount of copper (Catalytic promoter).

During the production of methyl alcohol from water gas (CO + H2),chromic oxide (Cr2O3) is used as catalytic promoter to increase the activity of zinc oxide (ZnO) catalyst.

Reason : Catalytic promoter increases the number of activity centres on the surface of catalyst due to which the rate of reaction increases.

→ Enzymes are complex nitrogenous organic compounds. They are obtained from living plants and animals. They are actually protein molecules having high molecular mass ranging from 15,000 to 1,000,000 g mol-1 and form colloidal solutions in water. Enzymes are very effective catalysts. Enzymes are effective generally for those chemical reactions which are related to natural processes.

→ They are also known as biochemical catalyst and the phenomenon of enzyme catalysis is known as biochemical catalysis Various enzymes are obtained from living cells. However, the first enzyme was synthesised in the laboratory in 1969. Enzymes are vital for the biological processes. Without enzyme, the life processes would be to slow to sustain life. The following are some of the examples of enzyme catalysis.

Inversion of can sugar : In the presence of enzyme invertase’ cane sugar is converted into glucose and fructose.

Conversion of starch into maltose: In presence of enzyme ‘diastase’, starch is converted into maltose.

Decomposition of urea into ammonia and carbon di oxide : In presence of enzyme ‘urease’, urea is converted into NH3 and CO2.

The summary of some important enzymatic reactions are given in table 5.2

Enzyme catalysis is quite similar to inorganic heterogeneous catalysis. It is unique in its efficiency and high degree of specificity. The main characteristic of enzyme catalysis are given below:

→ Highly Specific Nature : Enzymes are highly specific in their nature i.e., one enzyme can not catalyse more than one reaction.

→ High efficiency : Enzymes are highly effcient in their action. One molecule of an enzyme may catalyse one million molecules of the reactant per minute. It is due to the fact that the activation energy of chemical reaction is quite low in presence of enzyme.

→ Effect on equilibrium state : Like catalyst, enzyme cannot disturb the final state of equilibrium of a reversible reaction. It only increases the rate of forward and backward reaction equal to extent so that equilibrium may achieve faster.

→ Colloidal nature : Enzymes form colloidal solutions in water. Their efficiency is decreased in presence of electrolytes.

→ Effect of Inhibitor or poisons : Like catalyst, enzymes are also poisoned in presence of certain substances. These substances are known as inhibitor or poisons. The inhibitors or poisons interact with the active functional groups on the suface of enzyme and often reduce or completely destroy the catalytic activity of the enzymes. For example, many drugs work as enzyme inhibitor and they destroy the activity of enzyme in the body.

The mechanism of enzyme catalysis involves the following steps:

→ Formation of Complex : There are various cavities on the surface of colloidal particles of enzymes. These cavities have characteristic shape and have active groups like-NH2, -COOH, -SH, -OH etc. on its surface. These active groups actually are active centers at the surface of enzyme particles. The reactants or substrate which have complementary substances, fit into these cavities just like key fits into a lock and form a activated complex

Formation of products : The complex is activated hence hase higher energy. So it decomposes easily into products.

Mx/n [(AlO2)x(SiO2)y].mH2O
where, M = Na+, K+, Ca2+ like metals
n = Valency of cation
m = Number of molecules of water of crystallisation Zeolites have three dimentional network structure of silicates in which some silicon atoms are replaced by aluminium atoms giving Al-O-Si frame work. Zeolites are formed in nature as well as synthesised artificially.

→ Zeolites, which are used as catalysts, first of all heated strongly in vacuum so that water of crystallization can be lost and it may become porous. The size of pores in zeolites varies between 260 pm to 740 pm. In this way only those molecules can be adsorbed whose size is small enough to enter in these pores and can also bo left catalyst easily.

→ Zeolites do not work as catalyst for those molecules which are too big to enter. Thus zeolites act as selective adsorbents and hence work as molecular sieves.

Example : (i) ZSM-5 (Zeolite sieve of molecular porosity 5) is used in petroleum industry. ZSM-5 converts alcohols directly into gasoline (petrol) by dehydrating the alcohol so that a mixture of hydrocarbons is obtained.