→ The name ‘Protein’ is given by Berzelius in 1938. The word protein is derived from Greek word, “proteios” which means primary or of prime importance because proteins are the most important chemical substances which are necessary for growth, repair and development of life.

→ Proteins are found in all living cells. Main sources of proteins are milk, cheese, pulses, peanuts, fish, meat, etc. They occur in every part of the body and form the fundamental basis of structure and functions of life. In humans, hair, skin. haemoglobin, nails, enzymes and cells etc., are made of proteins.

→ Proteins can be classified into two types on the basis of their molecular shape.

→ Fibrous protein : When the polypeptide chains run parallel arid are held together by hydrogen and disulfide bond, then fibre-like structure is formed. Such proteins are generally insoluble in water. Their structure is not changed by change in temperature and pH. Some common examples are keratin (present in hair, wool, silk) and myosin (present in muscles), etc.

→ Globular proteins : This structure results when the chains of polypeptides coil around to give a spherical shape. These are usually soluble in water. These are also soluble in aqueous solution of acid, base and salts.

→ Insulin and albumins are the common examples of globular proteins.

→ Proteins can be classified on the basis of product obtained after hydrolysis of proteins as:

All proteins are polymers of a-amino acids. As the name suggests, amino acids contain two functional groups, —amino (—NH2) and carboxyl (—COOH) groups. The amino group (—NH2) is basic and the carboxyl group (—COOH) is acidic in nature. 20 amino acids are known which are joined in different types and forms thousands of protein molecules i.e.,all the proteins are made up of these twenty amino acids.

→ Depending upon the relative position of amino group with respect to carhoxyl group, the amino acids can be classified as α,, γ, δ, and so on.

→ α-Amino acids : In these amino group is present at α-position of carboxylic group. This means that both the functional groups are at same carbon atom. Examples are glycine and alanine.

→ β-amino acids : In these, amino group is at β-position of carboxylic group. Example: β-amino propanoic acid.

→ On the basis of number of amino and carboxylic acid groups, these are caissified as neutral, acidic and basic amino acids.

→ Neutral amino acids : These contain equal number of amino and carboxyl groups. This makes it neutral. Example is Glycine and Alanine.

→ Acidic amino acids : In these number of amino groups is less than carboxylic groups. Example are Aspartic acid and Glutamic acid.

→ Basic Amino acids : In these number of amino group is greater than carboxylic groups. Examples are Lysine.

→ They cannot be produced by the body. The essential amino acids are arginine, valine, histidine, isoleucine, leucine, lysine, methionine, threonine and tryptophan.

→ Arginine and histidine are called semi-essential amino acids as they can be partly synthesized in the human body. 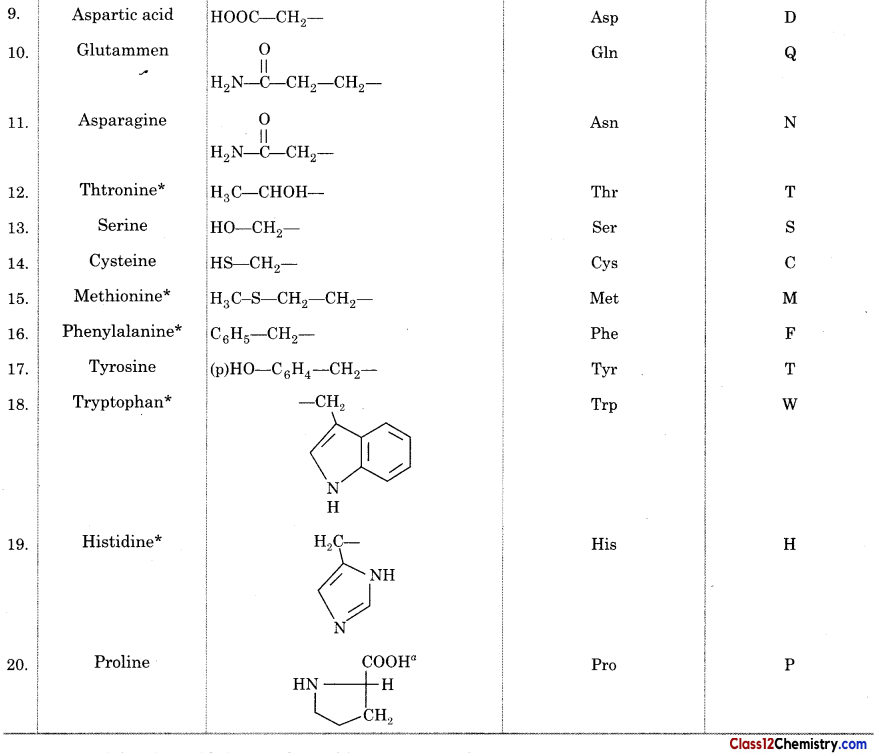 → 10 are essential amino acids in out of 20, which are not synthesized is some animals and humans of higher class.

→ These all are taken by food materials. These are filled by the proteins which have essential amino acids. eg— kesene milk protein.

→ Except first number of glycine all members of amino acids have asymmetrical carbon that,s why it is optically active. 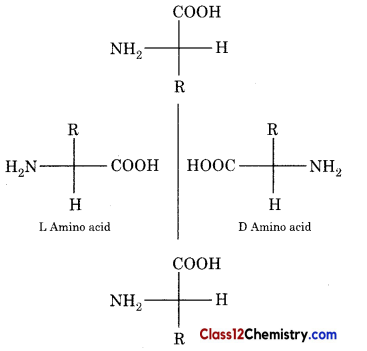 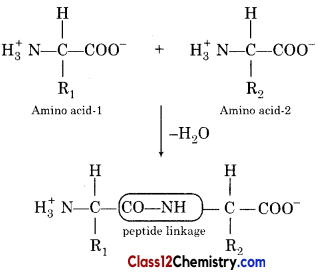 Depending upon the number of amine acids. peptides can be of three types:

→ Polypeptides : When the number of amino aicds is more than ten, then the products are called polypeptides.

→ Proteins : A polypeptide with more than hundred amino acid residues, having molecular mass higher than 10,000u is called a protein. 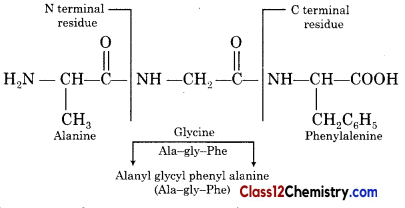 Polypeptides contains 10 to loo amino acids. Thus, when the number of aiino acids is more than ten. then the products are called polypeptides.

→ Proteins are polymers of a-amino acids which are joined by peptide bond (—CO —NH). The structure of proteins is very complex. Thus, structure and shape of proteins can be studied at four different, levels i.e., primary, secondary, tertiary and quaternary. Each level being more complex than the previous one.

→ Any change in this primary structure i.e.. the sequence of amino acids creates a different protein. Example, haemoglobin is a chromoprotein which is found in red blood cells. Its function is to transport oxygen obtained through breathing by lungs. It is made up of 574 amino acid units.

→ The change in one amino acid in sequence in haemoglohin can change its structure. This is knows as Sickel Cell Anaemia. It happens because valine amino acid is present m haemoglobin instead of glutamine (which is found in normal haemoglobin). This disease can cause death in human beings. Normal Haernoglobin: 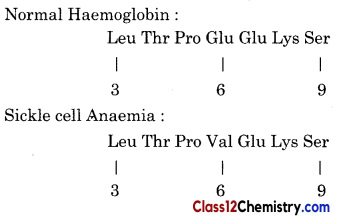 → Insulin is a polypeptide hormone, which is produced in pancreas. It is made up of 51 amino acids. Deficiency of insulin causes of Diabetes.

→ Secondary Structure of Proteins : The secondary structure of protein refers to the shape in which a long polypeptide chain can exist. These structures arise due to the regular folding of the backbone of the polypeptide chain due to hydrogen bonding between —COOH and —NH— groups of the peptide bond, They are found to exist in two thiferent types of structures:

→ α-helix structure : a- Helix is one of the most common ways in which a polypeptide chain forms all possible hydrogen bonds by twisting into a right handed screw (helix) with the —NH group of each amino acid residue hydrogen bonded to the —CO— of an adjacent turn of the helix as shown.

→ There is no free movement in this helix, therefore, helix is rigid. The alpha helix is right handed when the chain is followed from the amino to the carboxyl direction.

→ These proteins are flexible and can be stretched. Wool, hair, muscles etc., has this type of structure. The apiha-helical structure for proteins is given by Linus Pauling in 1951. 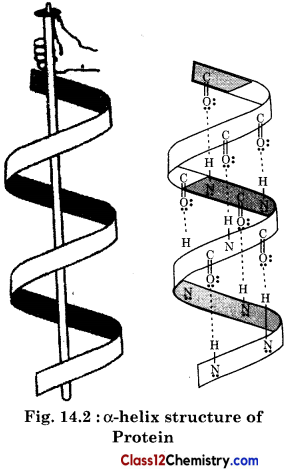 → β-pleated structure: In this structure, all peptide chains are stretched out to nearly maximum extension and then laid side’by side which are held together by intermolecular hydrogen bonds. The structure resembles the pleated folds of drapery and therefore, it is known as n-pleated sheet. This structure is soft but not flexible. Example, silk has this type of structure. 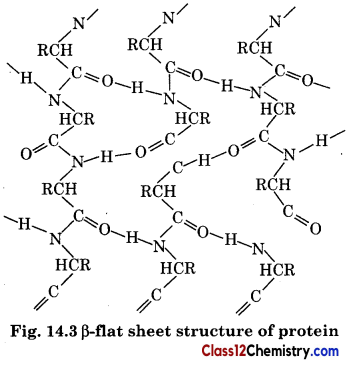 → Tertiary Structure of Proteins : The tertiary structure of proteins represents overall folding of the polypeptide chains j. e,,further folding of the secondary structure. It gives rise to two major molecular shapes, fibrous and globular. The main forces which stabilise the 2° and 3° structures of proteins are hydrogen bond, disuiphide linkages, van der Wall’s and electrostatic forces of attraction.

Quaternary Structure of Proteins : Some of the proteins are composed of two or more polypeptide chains referred to as sub-units. The spatial arrangement of these subunits with respect to each other is known as quaternary structure. 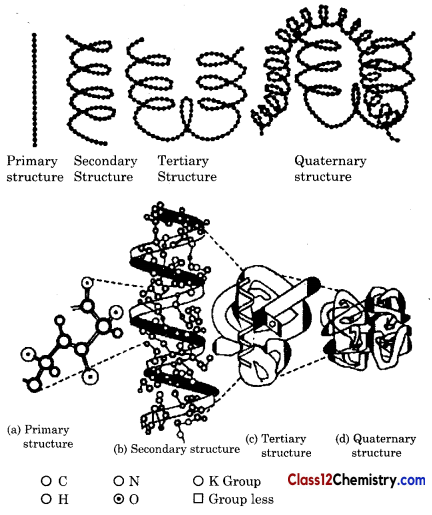 → Proteins found in a biological system with definite configuration and biological acts is called a native protein.

→ When the native protein, is subjected to physical change like change in temperature or chemical change like change in pH, the hydrogen bonds are disturbed. Due to this, globules unfold and helix get uncoiled and protein loses its biological activity. This is called denaturation of proteins. Denaturation causes loss in biological activity of protein.

The coagulation of egg while on boiling of egg protein is an example of irreversible protein denaturation.

→ Curding of milk which is caused due to the formation of lactic acid by the bacteria present in milk. The reversible process is called the reverse of denaturation i.e., renaturation. This is when the disruptive agent is remo’ed and the protein recovers its original physical and chemical properties and biological activity.

→ Uses : Denaturation of proteins is used in the test of molecules of glucose, urea etc.. present in blood or serum. The sample of blood or serum is denatured by acid which causes precipitation. This precipitate is filtered. Then rest of the solution is tested for glucose urea etc., by chemical analysis. 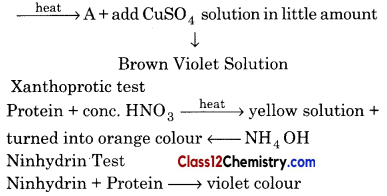