→ The polymeric molecules made up of carbon, nitrogen, hydrogen oxygen and phosphorous which determinesb heredity characters of living beings are called nucleic acid. The characteristic features are transmitted from one generation to the next, by the process of inheritance.

→ Nucleic acid are very important for life as the ‘genes’ having genetic code in chromosomes are made from them.

→ Nucleic acids are helpful in control of protein synthesis in various cells.

→ First of all, in 1869, Swiss scientist Friedrich Miescher isolated nucleic acids from nuclei of pus cells and was named as nuclein. After that in 1889, Richard Altman, gave them the name ‘Nucleic acids’. 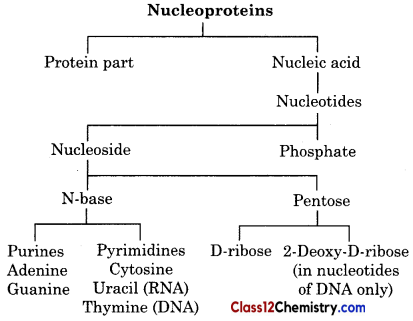 → Nucleic acids are colurless, complex and shapeless molecules. There are two types of nucleic acids. They are:

→ Complete hydrolysis of DNA (or RNA) yields a pentose sugar, phosphoric acid and nitrogen containing heterocyclic compounds (called bases). In DNA molecules, the sugar moiety is α-D-2-deoxyribose whereas in RNA molecule, it is β-D-ribose. Hydrolysis of nucleic acids can be shown as : 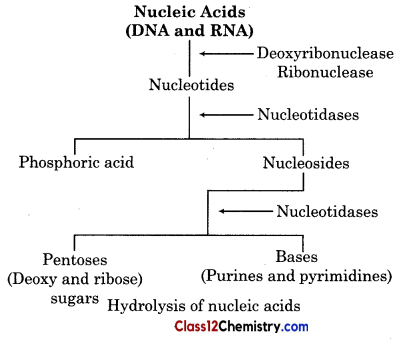 Phosphoric acid : It forms esters to — OH groups of the sugars to bind nucleotide segments together.

Sugar : Nucleic acid have two types of pentose sugars—ribose and deoxyribose. In deoxyribose, H—C—H— group. The sugar moiety in DNA is β-D-2-deoxyribose whereas in RNA molecule, it is β-D-ribose. Both the sugars molecules are in furanose form.

Organic Base : These are nitrogenous bases. Two types of organic bases are present in nucleic acids. These are purines and pyrimidine.

Purines : One purine forms a six membered ring which condenses with five membered ring. Adenine and guanine are purines. These are found in both DNA and RNA.

→ Nucleoside : A unit formed by the attachment of a base to 1’ position of sugar is known as nucleoside. In nucleoside, the sugar carbons are numbered as 1’, 2’, 3’, etc. In order to distinguish these from the bases. In a nucleoside C-1 of sugar, N-1 of pyrimidine base is attached with N9 of purine.

→ Nucleotide : When nucleoside is linked to phosphoric acid at 5-position of sugar moiety, we get a nucleotide. Nucleotides are joined together by phosphodiester linkage between 5’ and 3’ carbon atoms of the pentose sugar. In ribose sugar, it can attach to C-2 sugar. Nucleotide can be represented by three capital letters. 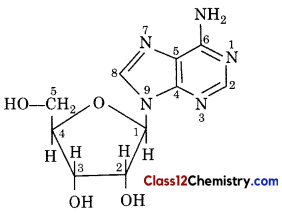 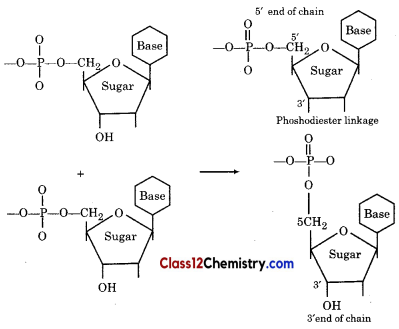 → The sequence in which sugar, phosphate and base are attached in called primary structure of nucleic acids. These can be represented as: 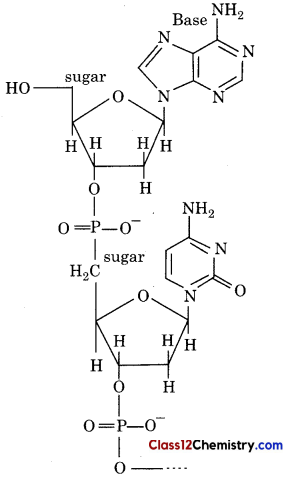 Difference between DNA and RNA

→ DNA is a double stranded molecule. The primary structure of DNA is shown in Fig. 14.7. DNA is a large molecule whose weight is about thousands. Chargaff in 1950 done chemical analysis is DNA and concluded that (i) number of adenine is always equal to thymine and number of cytosine is equal to guanine. (ii) The ratio of bases in DNA is thfferent in different group but A always bond to T and C with G.

→ Double helical structure of DNA is given by Watson and Crick. According to them.

→ It is a double helix with two right handed helical polydeoxyribonucleotide strands twisted around the same central axis.

→ The two strands are antiparallel. The phosphodiester linkages of one of these strands runs in 5’ to 3’ direction while the other strand runs in 3’ to 5’ direction. The bases are stacked inside the helix in planes perpendicular to the helical axis.

→ These two strands are held together by hydrogen bonds. In addition to hydrogen bonds, other forces like, hydrophobic interactions between stacked bases are also responsible for stability and maintenance of double helix.

→ which is proved by the complementary base pairing in DNA structure.

→ The genetic information is present only on one strand known as template strand. The double helix structure contains major and minor grooves in which proteins interact with DNA.

→ The diameter of double helix is 2 nm. The double helical structure repeats at intervals of 3.4 nm (one completer turn) which corresponds to 10 base pairs.

→ The 13-conformation DNA hiving the right handed helix is the most stable. On heating the two strands of DNA separate from each other (known as melting) and on cooling these again hybridize (annealing). The temperature at which the two strands separate completely in known as its melting temperature (Tm) which is specific for each specific sequence. 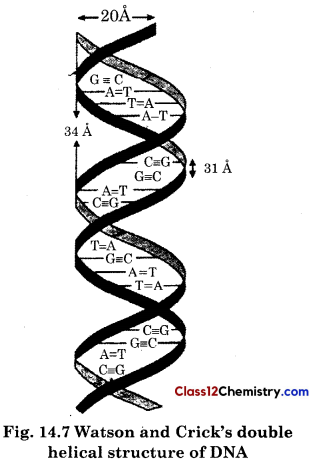 There are two main biological functions of nucleic acids :

→ Replication can be defined as “the process in which a single DNA molecule produces two identical daughter molecules of itself”. This replication is a semi-conservative process. 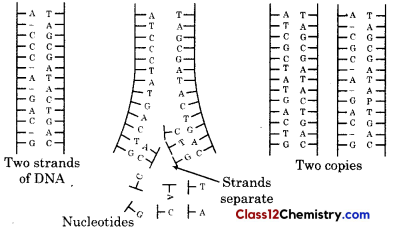 → The parent DNA has two complementary strands, which unwinds by breaking hydrogen bonds. The separate strand acts as templates for the synthesis of new strands. As a result two identical copies of DNA are produced.

→ These daughter molecules contain one parental strand and one new strand. Hence, this is known as semi -conservative replication.

→ DNA replication follows the base pairing rules by which A pairs with T and G pairs with C. Thus each daughter molecule is an exact replication of the present molecule.

The synthesis of proteins can be explained as:

→ Three types of RNA takes part in protein synthesis (m-RNA, r-RNA and t-RNA) which are synthesised by DNA.

→ Transcription involves the binding of RNA-polymerase at the promoter site on DNA. As it moves along (through structural gene), the DNA unwinds and one of the two strands acts as template to synthesize a meaningful RNA and other strand act as non-coding. A complementary RNA strand is synthesized with A. U, C and G as bases. RNA synthesis is terminated when the RNA-polymerase falls off a terminator sequence on the DNA. 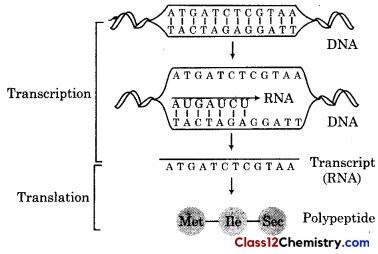 → Translation : This process is very complex. The formation of protein from m-RNA is known as translation. More than loo macromolecules are used in this process such as m-RNA, t-RNA, ribosomes etc. It refers to the process of polymerisation of amino acids are defined by the sequence of bases in the m-RNA. The amino acids are joined by a bond which is known as a peptide bond.

→ Protein synthesis takes place in cytoplasm. After transcription, m-RNA moves to ribosome in cytoplasm from nucleus. r-RNA are components of ribosomes. The base sequence in RNA is studied in three groups. This group of three nucleiotide triplet is known as codon.

→ Each codon represents a particular amino acid. t-RNA has specific sequence of bases at the ends which are complementary to base sequence of m-RNA. At the other end of t-RNA a specific amino acid is attached.

→ In ribosomes, amino acids retransferred from t-RNA to m-RNA. Those amino acids whose base sequence of t-RNA which is complementary to base sequence in m-RNA are bonded by m-RNA thorough peptide linkage. It this way, polypeptide chain is formed and protein synthesis takes place.

→ Genetic code refers to the relationship between the sequence of nucleotides (introgen bases) on m-RNA and the sequence of amino acids in proteins. Each code in known as codon with three nucleotides (triplet). It has been deciphered by Nirenberg, Khorana, Severo Ochoa and Crick.

→ As stated earlier, code for protein synthesis is determined by DNA. The sequence of nucleotides on DNA is known as gene. In living cells, each protein has a specific gene. 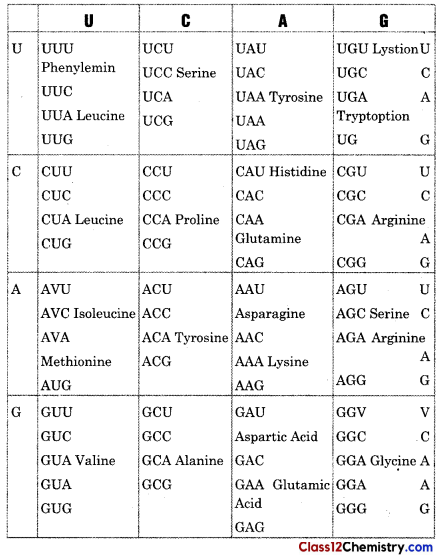 Some of the features of genetic codes are: