→ less difference in energy of molecular orbitals. By which these form a band which is called valence band. The higher empty-band near to filled valence band is called conduction band. We can explain conductors, insulators and semiconductors on the basis of band theory.

→ If valence band is partially filled or it overlaps with the higher energy or unoccupied conduction band, then electrons can flow easily under the influence of applied electric field. Therefore, the metals conduct electricity. 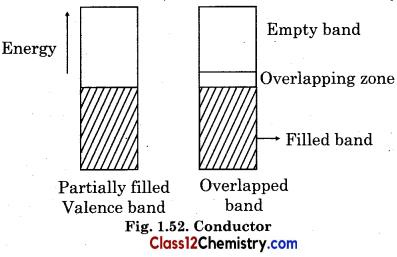 → If there is more difference between filled valence band and unoccupied conduction band then electrons can not jump from the energy gap due to which the conductivity of substances is either very less or behave as insulators. 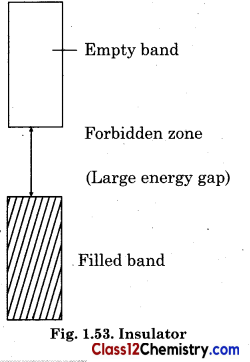 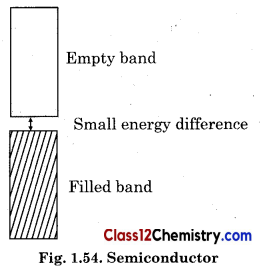 Types of semiconductors : These are of two types :

Two types of semiconductora are formed by doping:

→ Electron Rich impurities and n-Type Semiconductors: When elements of 15th group like P or As, in which five valence electrons are present are doped with elements of 14th group i.e. Si, Ge, then some lattice points are formed in crystals of 14th group and 4e– out of 5 form covalent bond with neighbouring Si atoms while 5th e– is free. This free e– increases the conductivity. So, it is called n-type semiconductor. 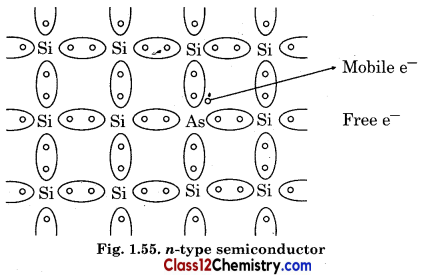 → Electron Deficient Impurities and p-Type Semiconductors: When elements of 13th group like Al, Ga, In, in which three valence electrons are present when doped with elements of 14th group like Si, Ge then these come on lattice point in crystals of 14th group. Three electrons form covalent bond with neighbouring Si or Ge atoms and one place is vacant. The place where bonding does not occur is called electron hole.

→ Electron from neighbouring atom is fill this hole but due to this, electron hole is formed at that place. Thus, here conductivity is due to filling of electron or movement of hole in opposite direction. So, it is called p-type semiconductor. 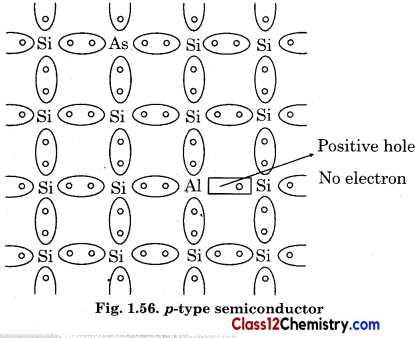 → GaAs is very fast responsing semiconductor. Zns, Cds, CdSe, HgTe etc are examples of compounds of group 12-16. In these compounds. bonds are completely covalent and their ionic properties depend on difference of electronegativities of both elements present in them.