Extraction of Iron from its Oxide ore :

→ The atomic number of iron is 26. It belongs in d-block of periodic table. It is very reactive metal it does not exist in native state. It is second most abundant metal in earth’s crust. Its percentage abudance is 5.1%. In combined state, it exists in the following minerals:

→ But iron is extracted from its oxide ores especially from magnetite, haematite and limonite ores. The extraction involves the following steps:

→ Pulverisation : In pulverisation, the huge lumps of haematite (Fe2O3) is converted into powdered form with the help of ball mills.

→ Calcination : The concentrated ore is heated in limited supply of air in a reverberatory furnace to remove moisture, non metals as volatile oxides and to convert carbonate ore (if present) into oxides. During the calcination, the entire mass becomes porous. The related reactions are as follows: 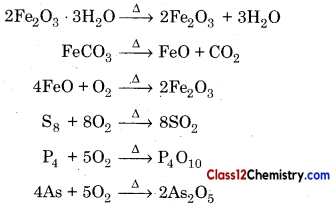 → Smelting : The ore obtained from calcination is reduced by carbon in a blast furnace. This process of reduction of ore by carbon is known as smelting. During smelting, mixture of calcined ore (8 parts) with coke (4 parts) and limestone (1 part) is charged into blast furnace by cup and cone arrangement from the top of blast furnace.

→ Here oxide ore is reduce into metal. Thermodynamics helps us to understand why coke is used to reduce oxide. Then main reduction step in the process is

→ The above reaction can be seen as a couple of two simple reactions where one reaction involves the reduction of FeO and other reaction is oxidation of Cinto CO.

→ On coupling the above two reactions, first reaction is obtained. In reaction (1) the change in Gibbs energy will be as follow :

→ So, for this we consult Ellingham diagram. Blast furnace is a tall cylindrical furnace which is made up of steel and lined inside with fire bricks. At the top, furnace has a hopper which rests over cup and cone arrangement with the help of this arrangement charge is introduced into the furnace. It also does not allow to pass any gases which are present inside the furnace. At the bottom of the furnace, small pipes known as tuyeres used to enter the blast of hot air (which is preheated at 1000 K) in furnace.

→ A tapping hole is also present at bottom to withdraw molten metal. Instead of these an outlet is also present to remove slag During the reduction of calcined ore in blast furnace the added coke served as a fuel as well as a reducing agent. The limestone serves as a flux to remove gangue. The burning of coke by preheated air produce carbon mono oxide and supplies most of the heat required for working in furnace.

→ Due to burning of coke, the temperature of bottom of blast furnace reaches upto 2200 K. As the gases move up and combine with desending charge, the temperature falls gradually. Hence at bottom, temperature is about 2200 K, in middle it is about 1300 K and near the top it is only in between 700-900 K. 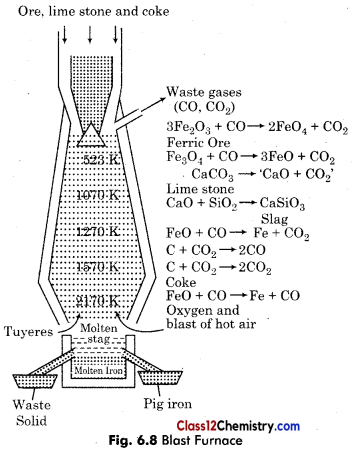 The reactions taking place in different zone of the furnace are as follow:

→ Combustion zone : It is the lowest part of furnace above the hearth. In this zone, coke burns in the presence of hot air and produce carbon dioxide. The formation of carbon dioxide is highly exothermic and hence a lot of heat is released of due to this the temperature of this zone becomes nearly 2170 K.

→ Fusion zone : As carbon dioxide rises upward and meets with layers of red hot coke then it gets reduced into carbon mono oxide.

→ Above reaction is endothermic therefore the temperature of this zone reduces to about 1570 K. In this zone, the iron produced in the upper region melts. If any Fe2 O3 is presents then it also undergoes reduction by hot coke into iron. This zone is known as fusion zone.

→ Slag formation zone : It is the middle portion of the furnace. Here the temperature is about 1270 K. In this zone, the limestone decomposes and produces carbon dioxide (CO2)and calcium oxide (Cao). Here lime or calcium oxide acts as flux and combines with silica (a gangue) to produce slag.

→ The molten slag forms a separate layer because it is lighter than molten iron. This zone is known as slag formation zone.

→ Reduction zone: It is the upper most zone in blast furnace. The temperature of this zone is in between 500 K to 900 K. In this zone, the oxide ore is reduced to iron by carbon mono oxide.

FeO is further reduced into Fe at higher temperature by CO gas.

→ Iron formed in this zone is called spongy iron. This zone of furnace is known as reduction zone. The spongy iron produced in reduction zone moves down slowly and melts in the fusion zone (lower hotter part). The main reaction in lower part is:

→ The iron produced from blast furnace is known as Pig Iron. Pig iron has 4% carbon and many impurities in smaller amount (eg, S, P, Si, Mn). This iron can be converted into different shapes by blocks called Pigs that’s why it is known as Pig iron.

→ Pig iron is mixed with scrap of carbon and oxidised by passing hot air through it. The iron obtained by this process has 3% carbon content and some other impurities. It is called cast iron. Cast iron is extermely hard and brittle in nature.

Conversion of Cast iron into Wrought iron or Malleable iron :

→ Wrought iron or malleable iron is the purest form of commercial iron. It can be prepared from cast iron by oxidising the impurities. During the process, cast iron, scrap of carbon with lime and with small amount of haematite is transferred into reverberatory furnace. On passing a blast of hot air, all the carbon present, oxidised and removed as carbon mono oxide and carbon dioxide.

→ Here limestone is added as flux and sulphur, silicon and phosphorus are oxidised and passed into slag. The metal is removed and freed from the slag by passing through rollers. Wrought iron is extremely tough, highly malleable and ductile. It is resistant towards rusting and corrosion.