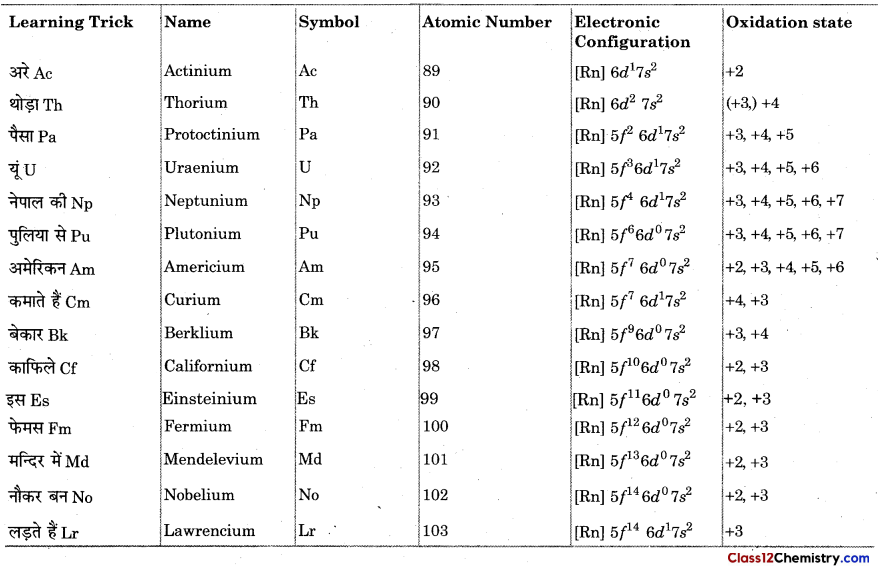 → This series contain 14 elements from Thorium (atomic number 90) to Laurencium (atomic number -103). These elements are radioactive in nature the earlier members have relatively long half-lives, but the latter ones have half-life values ranging from a day to 3 minutes. The half life of Lawrencium is 3 minutes. The latter members could be prepared only in nanogram quantities. Due to these reasons their study is more difficults.

→ Electronic configuration Their general electronic configuration is (n – 2)f1-14 (n – 1)d0-1ns2 or 5f1-14 6d0-17s2. All the actinoides have 7s2 only the configuration of 5f and 6d is variable. Actually the differentiating electron enters in 5f-subenergy level. The fourteen electrons are formally added to 5f, though not in thorium (z = 90) but form Pa onwards the 5f orbitals are completed at element 103.

→ Some important points related to electronic configuration are given below :

→ They show variable oxidation states this is because in these elements the energies of 5f and 78 orbitals are almost similar and electrons from all the energy levels may be used for bond formation. There is a greater range of oxidation states.

→ The actinides resemble the lanthanides in having more compounds in +3 state than in the +4 state. However +3 and +4 ions tend to hydrolyse. Because the distribution of oxidation states among the actinides is so uneven and so different for the earlier and latter elements. It is unsatisfactory to review their chemistry in terms of oxidation states.

General Characteristics of Actinoides or 5f-series

→ Physical properties: All the actinides are silvery white metals. They are highly electropositive in nature. Their melting points are lower than the melting points of transition metals. Except thorium and americium, they have high densities.

→ The colours of some of the actinide ions in aqueous solutions are shown in the table 8.16.

Table 8.16 : Colour of some actinide ions

→ Magnetic properties : Most of the ions of actinide series are paramagnetic ie, they are attracted into the magnetic field. It is due to the presence of unpaired f-electrons in these ions. Ac3+(5f°), Th4+(5f°) and Lw+ (5f14) are dimagnetic and are repelled by the magnetic field.

→ In these elements of 5f orbitals are deep inside the metal ion and are shielded from the surroundings by 6s and 6p subshells. Therefore, it is not possible to explain their magnetic moments in terms of number of unpaired electrons alone.

→ This is due to the fact that 5f-electrons have lesser shielding effect which results in the quenching of orbital contribution.

This magnetic properties can also be calculated by spin only formulas

→ Thorium tetra chloride also form complexes with pyridine, E.D.T.A. and oxime. The degree of complex formation decreases in the order :

→ Chemical properties : Due to less ionisation potential and high electropositive character the chemical reactivity of actinides are generally high. Actinides are highly reactive metals when they are finely divided. They react with boiling water and form oxides and hydroxides. They react with various non-metals at normal temperature.

→ They rapidly tarnished in air due to the formation of oxide layer on their surface. They are less reactive with acids and resist the action of alkalies. They forin compounds which give simple trivalent ions in aqueous solutions.

Uses of Actinoides or 5f-series