→ The carbon atom of the carbonyl group are sp2 hvbridised and forms three sigma (σ) bonds. The fourth valence electron of carbon is in unhybridized p-orbital of carbon and overlaps with p-orbital of oxygen to form π-bond. Instead of this oxygen atom also have two pair of non-bonding electrons.

→ Thus, the carbonyl carbon and three atoms attached to it lie in the same plane and the π-electron cloud is above and below this plane. Bond angle is 120° as expected in triangular planner structure. 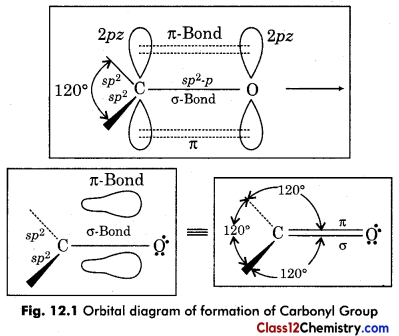 → Carbonyl compounds have sufficient dipole moment and they are more polar than ether. The high polarity of carbonyl group can be explained on the basis of resonance in which one is neutral structure (a) and other is polar structure (b) as shown below:

→ The polar nature of carbonyl group is also explained by their dipole moments. Carbonyl compounds (aldehyde and ketones) have sufficient dipole moment (2.3-2.8 D).