A colloidal solution is quite stable due to the following reasons:

→ The colloidal system, in which the dispersed phase and dispersion medium both are liquids, is known as emulsion, In emulsion, the finely divided droplets are dispersed in another liquid. It can be obtained by shaking a mixture of two immiscible of partially miscible liquids. Generally one of the two liquids is water.

Emulsions are of two types : 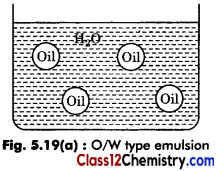 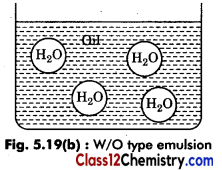 Emuslion of oil and water is unstable and some time they are distributed into two layers. So to make the system stable, a third component is added to it. It is known as emulsifying agent or emulsifier. Actually an emulsifier is an agent which stabilises the emulsion by lowering the interfacial tension between the constituents of the emulsion. It forms a film around the droplets of dispersed phase and prevents them from coming together and thus prevents coagulation.
Examples:
For oil/water (O/W) type emulsion, main emulsifier are protein, gum and syntheic surface active agents such as soaps, detergrents etc. Sometimes lyophilic sols also act as emulsifier.
For water/oil (W/O) type emulsion, main emulsifier are salts of heavy metals of higher fatty acids, alcohols of long chain, lamp black etc.

The process of breaking down of emulsion into two separate liquids is called demulsification.

Demulsification can be done by :

Methods for the Detection of Dmulsions :

To determine the type of emulsion, following methods are used:

→ Indicator Method: In this method, an oil soluble dye is shaken with emulsion. If coloured droplets are seen on looking at it under microsocope it is of O/W type emulsion. However, if the whole background is coloured, the emuslion is W/O type emulsion. It also known as dye test.

Some important applications of emulsions are given below:

→ In froth floation process : Froth floation process is used to concentrate sulphide ores. In this process, the finely powdered ore is treated with an oil emulsion. On passing air through this solution then ore particles come with froth to the surface, where it is collected.

→ Due to the presence of negatively charged groups, each oil droplet is surrounded by an ionic atmosphere. Due to repuslion, oil or grease particles change into very small drops. Thus a stable emulsion of the oil in water type is obtained. This emulsion can be washed away by stirring or rubbing the clothes and finally clothes become clean. In this way, soap and detergent help in cleaning the dust or dirt from the cloth by emulsifying the fat and grease containing the dirt.

→ Cottrell Smoke Precipitator: Smoke can be made free of colloidal particles of carbon by passing it through cottrell precipitator installed in the chimney of an industrial plants. Cottrell precipitator consists of two metal discs charged to a high potential. The charge present on dust and carbon particles present in smoke is neutralised and it in precipitated. While waste gas comes out through chimney. 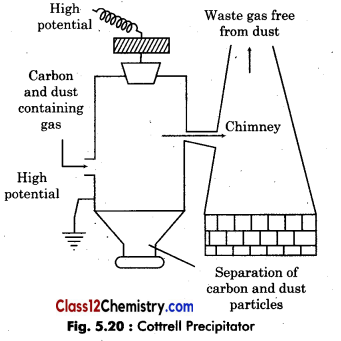 → Purification of drinking water : Water obtained from natural sources has suspended impurities in it. To coagulate these impurities, alum is added to it. In this way, water can be made pure for drinking

→ Medicines : Various medicines are colloidal in nature. Colloidal medicines are highly effective because they have large surface area and are therefore easily assimilated.

→ Cleansing action of Soap and Detergent: It is also an colloidal process.
→ Industrial Products : Paints, inks, synthetic plastics, rubber, graphite, lubricants, cement etc. are all colloidal solutions.
Photographic plates and Films : The photographic plates and films are prepared by coating an emulsion of the light sensitive silver bromide in gelatin over glass plates as celluloid films.

→ In sewage disposal : Sewage water has particles of dirt, rubbish etc, which are charged colloidal particles and do not settle down easily. For removing these particles, the process of electrophoresis is used. This sewage water is passed through metallic electrode having high potential difference. Now colloidal particles present in sewage migrate towards oppositely charged electrode where they are coagulated. The water obtained after purification can be used for irrigation.

→ Rubber Industry: Rubber is emulsion of negatively charged rubber particles present in water. It is called rubber milk. The protective layer of protein, which covers the particles naturally is broken on boiling rubber milk. 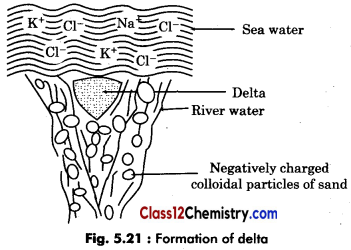 → Formation of Delta : River water is colloidal solution of clay particles which carry negative charge. Sea water contains a number of electrolytes like NaCI, MgCl, etc. When river water meets the sea water, the electrolytes present in sea water coagulates the colloidal solution of clay which gets deposited with the formation of delta at the mouth of the river.

→ Fog and Mist : When a large mass of air containing dust particles is cooled below its dew point, then the moisture present in air condenses on the surface of these particles forming fine droplets. These droplets are colloidal in nature and hence float in air in the form of mist or fog.

→ Natural Rain : Clouds are aerosols having small droplets of water suspended in air. These clouds sondense in the upper atmosphere and thus bigger in size, till they come down in the form of natural rain.

→ Blood : Blood is also an colloidal solution of an albuminoid substance. The styptic action of alum and ferric chloride solutions is due to the congulation of blood forming a clot which stops the further bleeding.

→ Soils : Fertile soils are colloidal in nature in which moisture or humus acts as a protective colloids. Due to colloidal nature, it adsorbs moisture and nourishing materials.