Relative and Absolute Configurations or D-L Nomenclature Preparation and Properties

→ Two configurations are possible for a compound having one asymmetric carbon atom which represents two optical isomers. One of them is dextro rotatory and other one is laevo rotatory. E. Fischer suggested that optical activity is an experimental property.

→ This is a system of assigning relative configuration to a molecule by establishing configurational relationship among the members of a family of compounds (i.e., carbohydrates and amino acids). Glyceraldehyde is arbitrarily chosen as standard.

→ Most of the sugars are genetically related to either D or L-glyceraldehyde and thus their configurations are defined by D or L According to Fischer projection formula, the main carbon chain of glyceraldehyde is kept vertically in which —CHO group is at the top and CH2OH group is at the bottom.

Similarly, end of sugars can be shown by D and L configurations.

→ D and L nomenclature is referred as the relative configuration because the molecule to be assigned D- or L-notation is being related to another molecule D- or L-glyceraldehydes accepted as a standard. 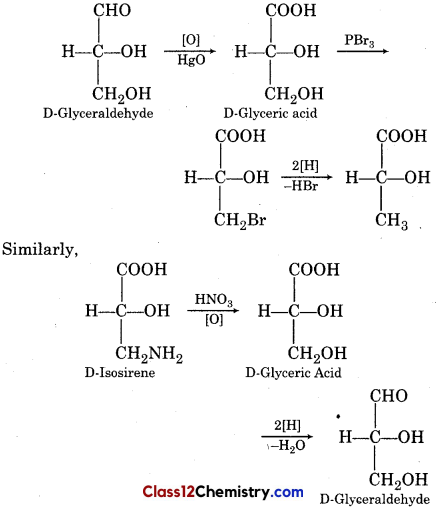 → The D-notation may be given to both dextro rotatory [d or (+)] or laevo rotatory molecule [l or (-)]. Same is true for L-notation. Hence, in the carbohydrates, to avoid the confusion (in the spoken language) between D- and d (+) and L- and l -; the most commonly used term to denote dextro rotatory compounds is (+) and not d. Simi1rly, most commonly used term to denote laevo rotatory compounds is (-) and not l.

→ In 1950, when X-ray crystallographic techniques are developed then Bijvoet found that Rosen hoff was considered that form of glyceraldehyde as D-configuration volumterically, it was actually D-form. Some other examples: 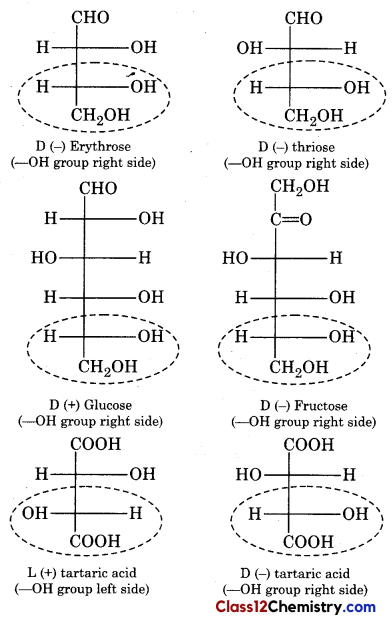