Ammonia can be prepared by the following methods.

→ Laboratory Method : Ammonia can be prepared in laboratory by heating ammonium chloride with slaked lime.

In this procese evolved ammonia is collected in a jar by the downward displacement of air. 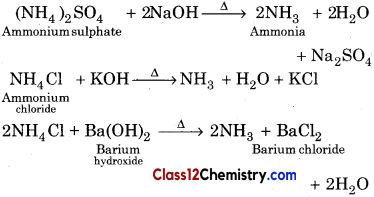 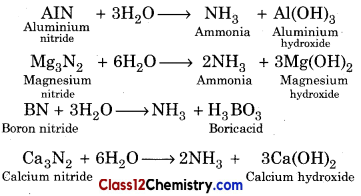 → The favourable conditions for good yield of Ammonia : According to Le-Chatelier’s principle 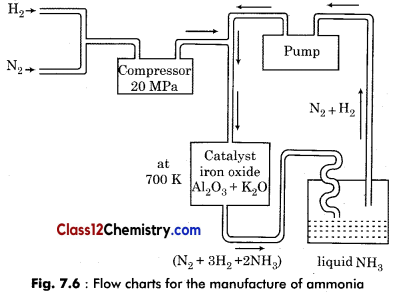 → Method : In preparation of ammonia, dihydrogen gas is obtained by the electrolysis of water. Dinitrogen gas is obtained by the fractional distillation of liquified air. These two gases are purified and then dried. Now the mixture of dinitrogen and dihydrogen gas in the ratio of 1:3 is compressed to 200 atmospheric pressure and allowed to enter in the catalyst chamber packed with the catalyst and the promoter.

→ The chamber is now heated to about 673 K to start the reaction. The formation of ammonia is an exothermie process so the evolved heat is consumed in further heating the reacting mixture. Hence no heating is required. The gases obtained from the catalyst chamber are the mixture of dihydrogen, dinitrogen and ammonia.

→ In mixture ammonia is about 15 to 20 %. The gaseous mixture (H2 + N2 + NH3) is now passed through a condensing chamber where only ammonia is condensed and gets liquified. This liquified ammonia is collected. The rest gases ie, dihydrogen and dinitrogen are recycled.

→ Drying of ammonia : Ammonia gas, prepared either from laboratory method or from Haber’s process, is generally moist. This ammonia gas is dried by passing it through quick lime (Cao). Ammonia gas can not be dried by concentrated sulphuric acid, anhydrous calcium chloride or phosphorus pentaoxide as it reacts with them as given here. 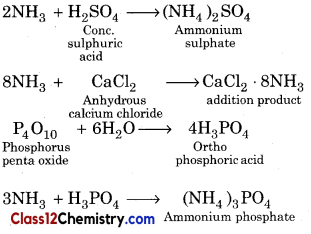