Preparation of Aldehyde and Ketones Properties

→ ‘PCC’ is also an important reagent which converts CH2OH group to —CHO group. It is known as Sarett’s reagent or Sarett.CoIIin’s reagent. It is prepared by mixing pyridine, chromium tn-oxide and HC1 in methelene dichioride. It’s formula is CrO3 2C5H5N/ CH2Cl2. 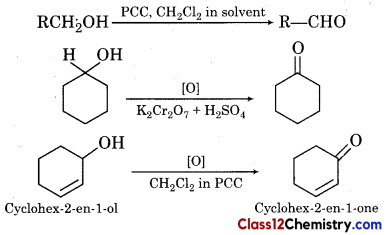 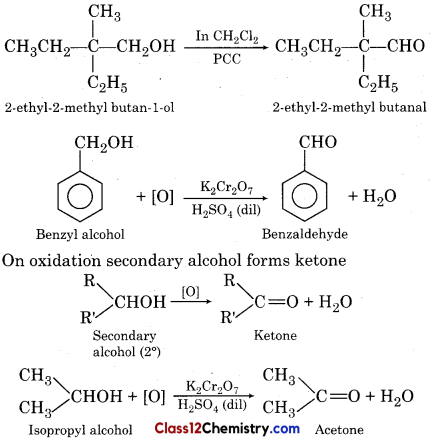 → Oppenauer Oxidation : When secondary alcohol is heated with a reagent aluminium tertiary butoxide [(CH3)3CO]3Al in excess of acetone then they are oxidized to ketones, this oxidation is called oppenauer oxidation.

→ By Dehydroqenation : The vapours of primary and secondary alcohols are passed over hot copper or silver at 300°C then aldehydes and ketones are formed respectively. 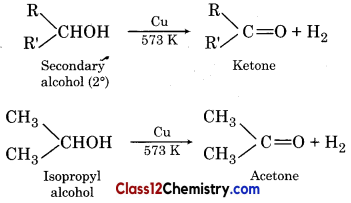 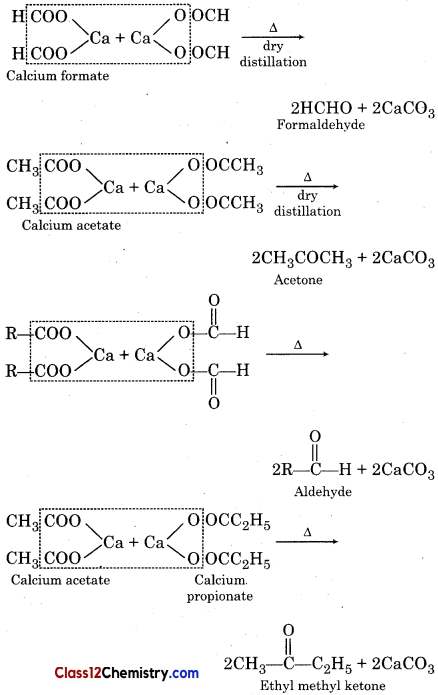 → By Catalytic Decomposition of Carboxylic AcIds : Carbonyl compounds are formed when vapours of fatty acids are passed over hot Al2O3 or ThO2 or MnO at 300°C 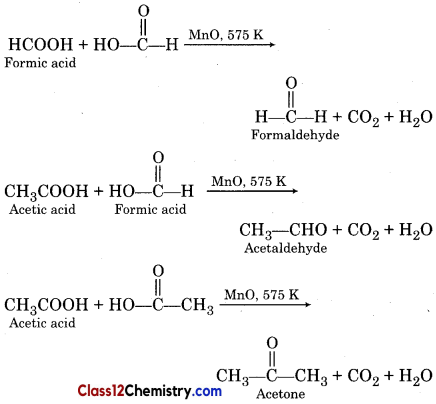 → By Hydration of Alkynes : In the presence of H2SO4 and HgSO4 the hydration of ethyne gives acetaldehyde. Other alkynes gives ketone in the reaction. 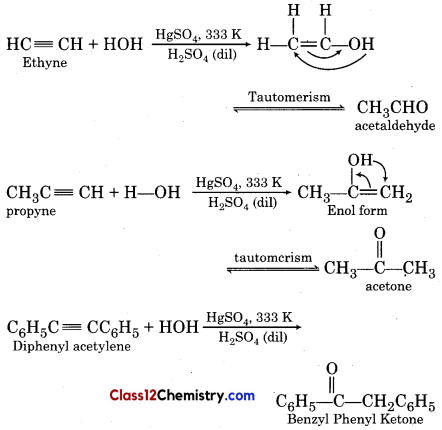 → By hydroboration Oxidation of Alkyn.s : The product obtained from hydroboration of alkynes on oxidation by alkaline H2O2 gives aldehyde and ketone

→ By Ozonolysis of Alkenes : Ozonolysis of alkenes followed by reaction with zinc dust and water gives aldehydes, ketones or a mixture of both depending on the substitution pattern of the alkene. 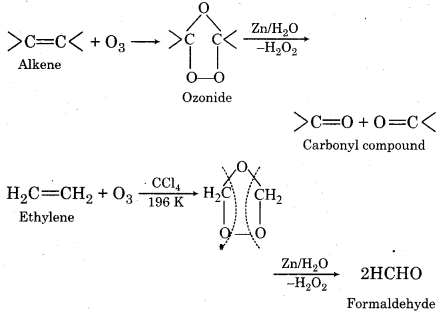 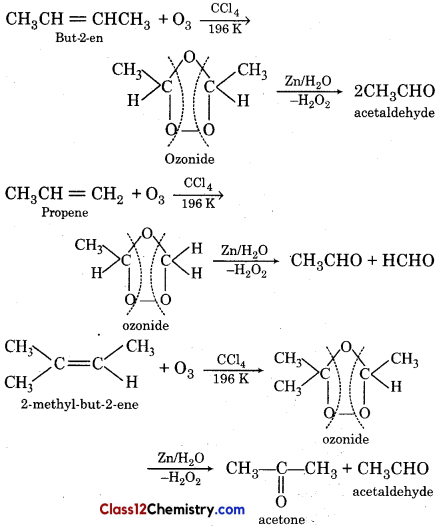 → By the Reaction of Ethyl Formate : One molecule of ethyl formate react with one molecule of grignard reagent and give aldehyde.

→ By the reaction of Hydrogen Cyanide : An addition product is obtained on reaction with hydrogen cyanide and grignard reagent, which on hydrolysis gives aldehyde. 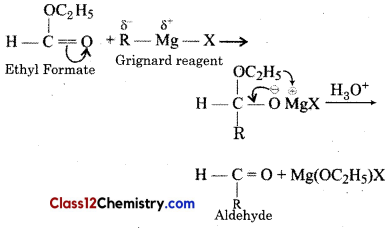 → By the reaction of Ethyl Ester : One molecule of ester of an acid other than formic acid react with one molecule of Grignard reagent to give ketone.

→ By the reaction of Alkyl Cyanide : An additional product is obtained on reaction with grignard reagent and alkyl cyanide which on hydrolysis gives ketone.

→ By the reaction of Alkanoyl Chloride : Alkynoyl chloride reacts with grignard reagent and form ketone

→ From Nitroalkanes-Nef Reaction : Salt formed by reaction of nitroalkane with base on hydrolysis with strong mineral acids (H2S04 , HCl or HNO3) gives ketones. 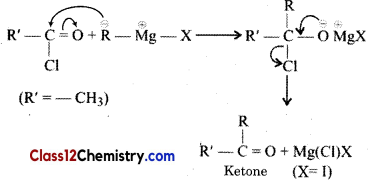 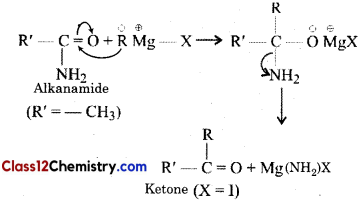 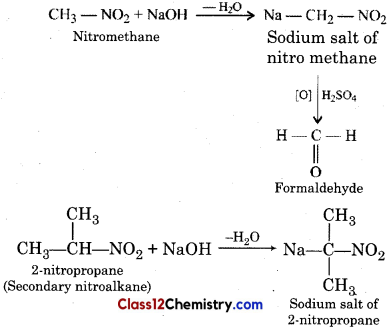 → By the Oxidation of Glycol : Reaction of iodic acid (HIO4) or lead tetracetate on glycol gives ketone and aldehyde. 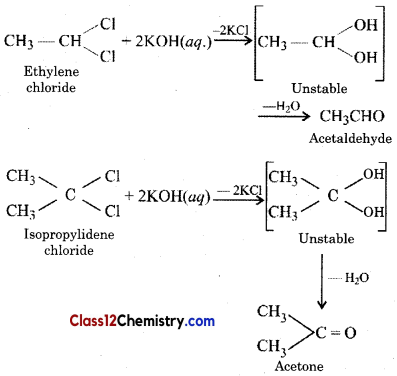 Methods of Preparation of Aldehyde Only :

→ From the reduction of alkyinitrile (Stephen Reduction) : When solution of alkyl nitrite in ether is reduced with stannous chloride in the presence of hydrochloric acid at room temperature, then Imine hydrochloride precipitated, which on hydrolysis with hot water gives aldehyde.

→ This reaction is called Stephen Reduction.

→ This reaction is called Rosenmund’s reduction. Formaldehyde cannot be prepared by this method because HCOCl is unstable at room temperature. Generally aldehydes on further reduction gives primary alcohols but here BaSO4 and sulphur or quinolene act as catalylic poison for Pd catalyst and prevent the reduction of aldehyde to alcohol.

Methods for Preparation of Ketones Only :

→ From acid chlorides or Acyl Chlorides : The ketones are easily prepared by reaction of suitable dialkyl cadmium with acid chlorides. 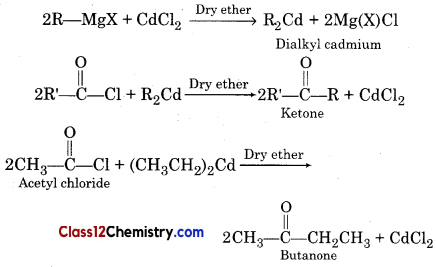 → In this reaction Grignard reagent can not be used directly because it is more reactive than dialkyl cadmium and converts the ketone produced in reaction into tertiary alcohols.

→ From IitrIIes : Ketones can be easily prepared by the reaction of grignard reagent with suitable alkyl nitrile. 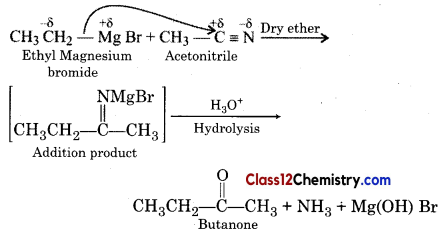 → In above reaction if hydrocyanic acid is used in place of alkyl nitrile then aldehydes are formed. 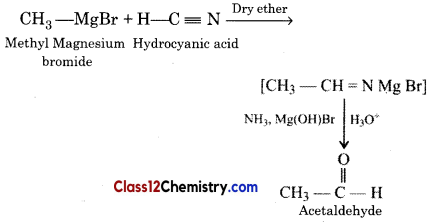 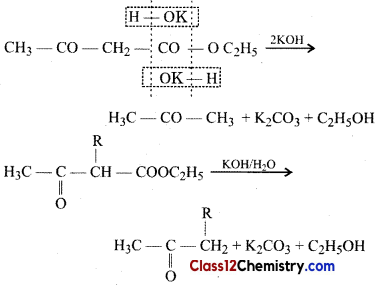