→ Polymers, generally known as plastics, are the backbone of modern era. It would be difficult to imagine the modern era without polymers. Polymers are not only used in household utilities, clothes, but also in vehicles, space-crafts, and medical field. Polymers are now also used in making of artificial organs.

→ Polymers are made by both type of molecules j. e. prganic as well as inorganic molecules. In 1920 Staudinger gave the definition of Polymer. According to him, “The substances, whose molecular mass is more than 10,000, are called macromolecules.”

→ In these macromolecules are polymers. The word ‘Polymer’ is derived from two Greek words; ‘Poly’ meaning ‘many’ and ‘mer’ means ‘unit or part’. The term polymer is defined as very large molecules having high molecular mass (103 – 107u.)

→ These are also referred to as macro molecular on a large scale. The repeating structural units are derived from same simple and reactive molecules known as monomers and are linked to each other by covalent bonds.

→ Process of formation of polymers from respective monomers is called ‘Polymerisation’.

Transformation of ethene to polythene

→ Interaction of hexamethylene dia mine and adipic acid leading to the formation of Nylon 6, 6 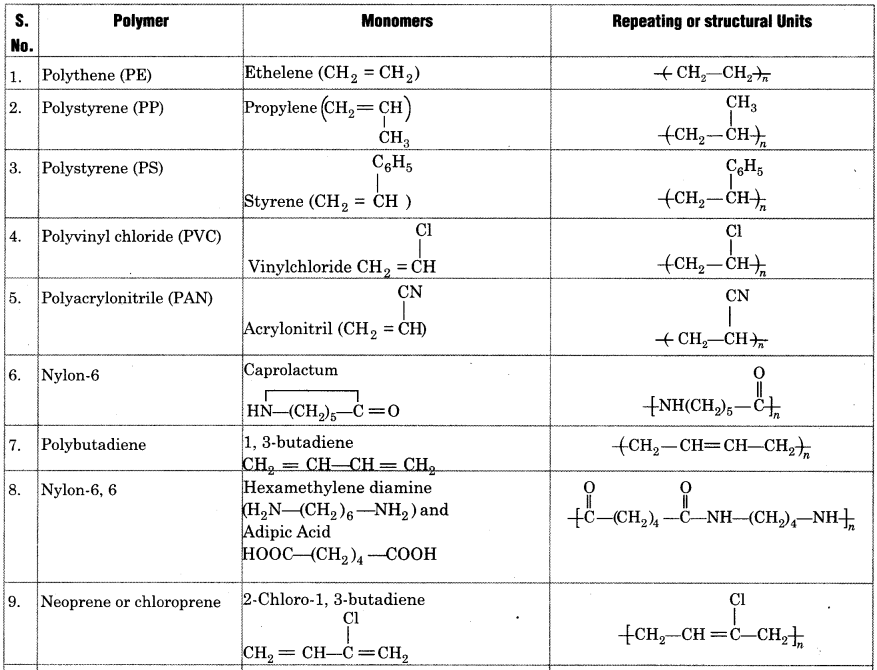 → Monomer : Simple and reactive molecules from which the polymer are prepared either by addition or condensation are called monomer.

→ Polymerisation : The process by which monomers are converted into polymers is called polymerisation.

→ Addition Polymers : The addition polymer are formed by the repeated addition of same or different monomers. e.g. Polyethene.

→ Homopolymer : Polymers whose repeating structural units are derived from only one type of monomer units are called homo-polymer. For example Polyethene, PAN, Teflon.

→ Elastomers : There are the Polymer having the weakest intermolecular forces of attraction between the polymer chains. Elastomers thus posses an elastic character e.g. Bu na-S. Neoprene.

→ Artitical Fibre : These are the polymers which have the strongest intermoleculer forces such as hydrogen bond or dipol-dipole interaction. e.g. Nylon 6,6 and Terylene.