Ozone is an allotrope of oxygen gas. It is higly reative gas. It is present in the upper atmosphere about 20 km away from the earth surface. The layer of ozone acts as a blanket and protects us from harmful ultraviolet rays.

→ When silent (sparkless) electrie discharge is passed through pure, cold and completely dry oxygen at 298 K temperature, then one is prepared. The appartus in which one is prepared is known as conizer.

→ The preparation of none from oxygen is an endothermia reaction hence during its preparation the use of silent electric discharge is compulsory so that it can be protected from decomposition. For the preparation of pure none (b.p 385 K), batteries are used in azoniser. Pure one is condensed in a receiver surrounded by liquid oxygen 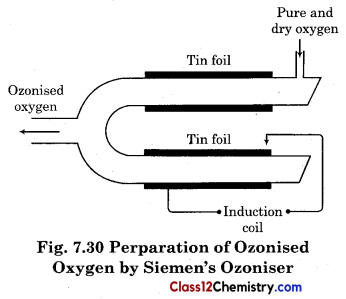 → Siemen’s zoniser is made up of two concentric tubes which are sealed at one end. There is an inlet for passing pure dry cygen and an outlet for release of cooniand oxygen or one. Outer surface of the outer tube and inner surface of the inner tube is coated with tin foil.

→ Some of the oxygen gets converted into ozone forming the product which has 15-25% Rone. For increasing the yield of product, following precautions must be taken

To get pure onone, the ononised oxygen obtained from the above method is surrounded by liquified air. As a result, ozone (b.p. 161. 2K) is condensed first and then Oxygen (b.p. 90°K). The small amount of oxygen present with osone can be separated by fractional distillation.

Some important chemical properties of one are discussed below

The decomposition of one can be entalyzed in presence of MnO2 Peblack, CuO etc.
Oxidising properties : Ozone is a powerful oxidising agent, because it easily liberates nascent oxygen.

Some important oxidising properties of osone are as follows

Similarly Cds, ZnS and Mns are also oxidised into their corresponding sulphater

Oxidation of KI: Oxone oxidises KI into I2

Similarly HBr, HI also oxidised into Br2 and I2 respectively

Oxidation of Nitrites. In presence of ozone, nitrites are oxidised into nitrate.

Oxidation of non-metals non-metal into their oxy-acids.

Sulphur is oxidised into sulphuric acid

Oxidation of metalloids: Ozone oxidises certain metalloids into their respective oxyacids
For example

→ During above given reaction mercury loves its meniscus and sticks to the sides of capillary. This process is known as tailing of mercury. 5. Estimation of ozone : When one reacts with an excess of potassium iodide solution buffered with a borate buffer pH 9.2), iodine is liberated which can be titrated against the standard solution of sodium thiosulphate. This is quantitative method for estimating one gas.

Hydrogen peroxide is reduced in to water in presence of ozone.

Sodium peroxide is reduced into sodium oxide in presence of ozone.

→ Formation of ozonide : Osone acts with unsaturated organic hydrocarbons containing double or triple bonds and a product is formed, which is known as ovonide. This ozonide reacts with water in the presence of Zn and form carbonyl compounds. The process in known as cronolysis. Some examples are given below: 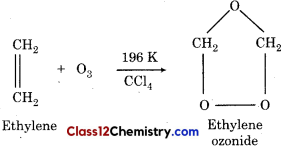 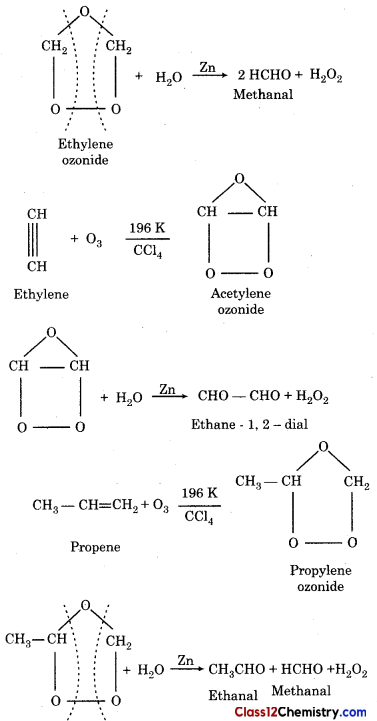 Depletion of ozone layer: Ozone layer is present in the stratepheme which is about 11 – 150 km above from earth’s surface

→ The chemicals responsible for the destruction of ozone layer are NOx released from aircraft) and chloro Eluorocarbons (CFC)(s)] used as aerosol propellants, in refrigerators and in air conditioner. The mechanism of depletion of none layer enn be represented as.

→ Due to the formation of oxone hole the high radiation ultraviolet rays are in a position to pass through this hole, which have a direct de to our earth. These rays are harmful to human beings and causes skin cancer, loss of wight and effect our immune system

→ The central oxygen atom is op hybridised, so the shape of ozone is angular with bond angle 116.8°. Due to the, presence of resonance both the bond has similar bopd length i.e. 127.8pm which is intermediate to single 0-0 (148 pm) and double 0=0 (110 pm) bond length which proves the presence of resonance.