→ Nitrogen is a very important element of organic compounds: Main funcctional groups in which nitrogen is present are as follows: 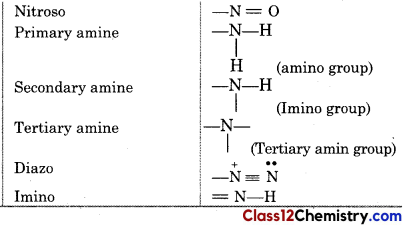 → Amines are regarded as derivatives of ammonia. Amines are obtained by replacement of one, two or all the three hydrogen atoms by alkyl or aryl groups

→ Amines are classified as primary (1° ), secondary (2° ) and tertiary (3°) depending upon the number of hydrogen atoms replaced by alkyl or aryl groups in ammonia molecule.

→ In addition to above three amines, a quaternary ammonium salt is also present, in which all the four hydrogen atoms of ammonium salts are replaced by alkyl or aryl groups. 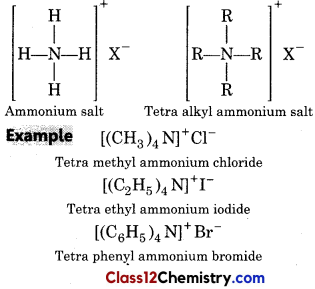 → Allphatic amines – In such type of amines nitrogen atom is attach with one or more alkyl groups.
Example : CH3NH2

→ Aromatic amines—In such type of amines nitrogen atom is attached with one or more aryl group directly.
Example : C6H5NH2

→ Ammonolysis—The dissociation of C—X bond with ammonia molecule is termed as ammonolysis.

→ Curtius degradation—The complete reaction in which acyl azide releases nitrogen and formes intermediate compound, gives primary amine on hydrolysis in acidic or basic medium which has one carbon less than carboxylic acid is known as Curtius degradation. 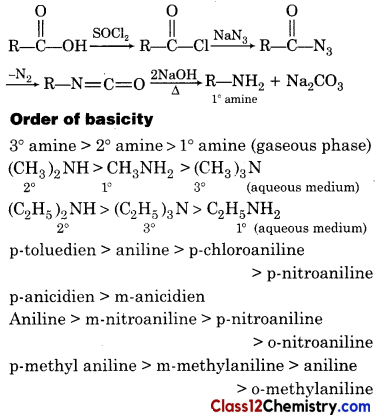 → Acylatlon – Aliphatic and aromatic primary and secondary amine give nucleophilic substitution reaction with acid chlorides, anhydride and ester.
This is called Acylation reaction.

→ Benzoylatlon – Amine also reacts with benzoyl chloride (C6H5COCl) and H-atom of amine is replaced by COC6H5 group, this reaction is called Benzoylation.

→ HydratIon Energy – The protonated amines form hydrogen bond with water molecule and relesase some amount of energy which is called Hydration energy.

→ Coupling reactions-When benzene diazonium chloride reacts with other aromatic compound then the azo products obtained have an extended conjugate system having both the aromatic rings joined through the -N = N- bond and coloured compounds are formed. Such type of reaction are termed as Coupling Reaction.

→ Alkyl Cyanides are obtained by dehydration of aldoximes in the presence of P2O5.

→ Alkyl isocyanide when heated strongly for a long time is converted to more stable cyanide.

→ Urea is monoacidic base because one -NH2 group is neutral due to resonance.

→ The mixture of conc. HNO3 and conc. H2SO4 is called nitrating mixture.

→ The readuction of nitroalkane in different conditions gives different product which is shown by following chart. 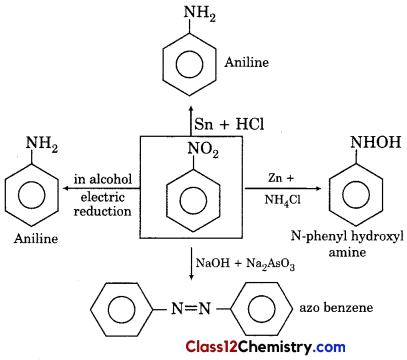 → Nitroarene or nitrobenzene is meta (m) directive for electrophilic substitution.