→ The concept of optical isomerism was first of all given by Louis Pasteur in 1848. He found that sodium ammonium tartarate is found in two crystalline forms which are mirror images of each other.

→ Louis Pasteur separated these crystals and then by X-ray diffraction. It is found that these crystals are mirror image of each other which cannot be superimposed to one another. Such compounds can rotate plane of polarised light. Therefore, these isomers are known as optical isomers and this phenomenon is called optical isomerism.

→ Ordinary light can be considered as an electromagnetic wave, which has electric and magnetic vibrations in all the directions perpendicular to the path of propagation. Ordinary light is made of light wave of different wavelengths.

→ By using prism or diffraction grating, light of a single wavelength, known as monochromatic light is obtained. If the light waves pass through a polarizer, which is made of Nicol prism, then only electric vibrations emerge in one plane. Such a beam of light is called plane polarised light. Plane polarised light is produced by an instrumet called polarimeter.

→ The angle of rotation by which the plane polarised light is rotated, can be measured by an analyzer in a polarimeter.

→ The aqueous solution of the substance is placed between the polariser and analyser. The analyser can be rotated by certain angle to compensate for the rotation of the plane polarized light by the optically active sample. The observed rotation (αobserved) is expressed in degree.

→ When monochromatic, plane-polarised light passes through certain organic compounds, the plane of polarisation is changed. These compounds are referred to as optically active compounds. If the substance rotates plane polarised light to the right (clockwise), it is called dextro rotatory (Greek for right rotation) or the d-form and it is indicated by placing a (+) sign before the degree of rotation. If light is rotated towards left (anticlockwise), the substance is said to be laevo rotatory (Greek for left rotating) or the 1-form and negative (-) sign is placed before the degree of rotation.

→ It is the number of degree of rotation observed if a 1 dm long tube is used, and the compound being examined is present to the extent of 1 g/mL. This is usually calculated from observations with tubes of other lengths and at different concentrations by means of the equation,

→ Where l represents length of the polarimeter tube (in dm) and C represents concentration of a solution or density for a pure liquid in g/mL (or g/cm3). t is the temperature and λ is the wavelength of the light used. The specific rotation for an active substance in any light in specific as other physical constants like melting point, boiling point, density, or refractive index etc.

→ A substance has three elements of symmetry. If any of these symmetry element is present in a molecule then the molecule does not show optical activity.

→ Plane of Symmetry : It represents the plane bisecting the molecule such that each half of the molecule is the mirror image of the other half. For example : Following letters of english alphabets have plane of symmetry, 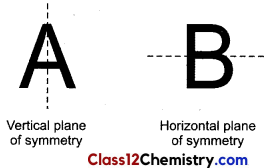 → These compounds do not show optical activity i.e.,these are optically inactive. 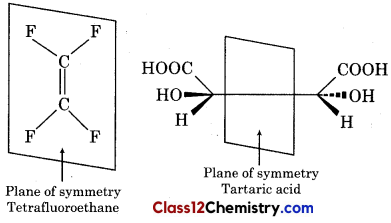 → Axis of Symmetry : It represents a n-fold axis of symmetry such that when molecule possessing such an axis is rotated through an angle of 360°/n about this axis and then reflected across a plane perpendicular to this axis, an identical structure results. The notation for a symmetry axis is Cn, where a is an integer chosen so that rotation about the axis by 360° returns the object to a position indistinguishable from where it started. For example, water has C2 axis of symmetry because water on rotating by 180° returns back to its original position.

→ Centre of Symmetry : A molecule is said to have a centre of symmetry if any line drawn from the centre of the molecule meets identical atoms at equal distances from the centre. This is also called centre of inversion. For example, S letter of english alphabet.

For example, Benzene. Ethene etc., has centre of symmetry.

→ If in any molecule, elements of symmetry are absent then the molecule will be asymmetric and able to rotate the plane of polarised light i.e., it shows optical activity. Such types of molecules have this property due to lack of symmetry, such molecules are not superimposable on their mirror images. An object, which is non.superimposable on its mirror image, is said to be chiral.

→ Chiral means asymmetrical. The word chiral is derived from the Greek word “kh&r” which means, “hand” and property of being chiral is called chirality or handedness. One mirror image rotates the plane of polarised lighi towards the right known as dextro rotatory which is denoted by d, whereas other mirror image towards the left known as laevo rotatory. It is denoted by l. Chirality results from an asymmetry in the molecule. 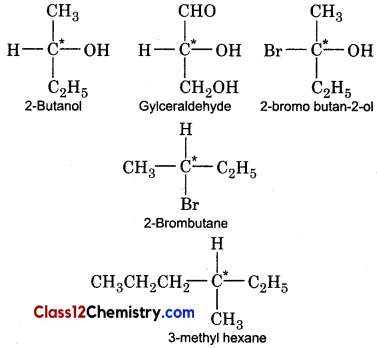 → It must be noted that enantiomers possess identical physical and chemical properties but differ in the direction (sign) of rotation of the plane polarized light.

→ Magnitude of rotation, however, is same for the two isomers. One of the isomers is dextro rotatory (+) enantiomer while the other is laeveo rotatory (-).

Compounds with to Stergeic Centers

There are certain molecules, which contain more than one asymmetric carbon atoms. In that case, two conditions are possible :

→ Non-symmetric Molecules : If an optical isomer has n chiral atoms, then the number of optical isomers will be 2n. For example, 2, 3-dichioro butanoic acid has two chiral atoms which contains different atoms or groups. Using the 2n formula there should be maximum of 22 = 4 stereoisomers. 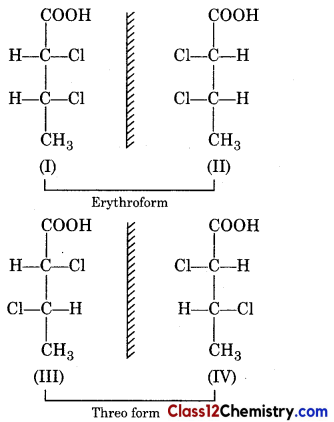 → As a result of differences in boiling point and solubility, diastereoisorners can be separated from each other by fractional distillation or fractional crystallization. Due to difference in their molecular shapes and polarity, they differ in adsorption and can be separated by chromatography.

→ In the Fischer projection formula, the erythro isomer has two identical substituents on the same side and the threo isomer has them on opposite sides. The terms erythro and threo are derived from erythrose and threose sugars respectively. The structure can be given as : 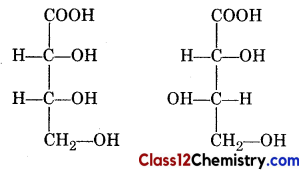 → Symmetrical Molecules (Meso Compounds) : In this group, tartaric acid can be taken as example,

→ Using the 2n formula, there should be maximum of 22 = 4 stereoisomers. These can be represented as : 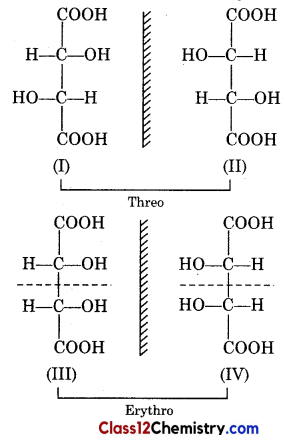 → I and II i.e., threo forms are mirror images of each other and are enantiomers. But in erythro form, plane of symmetry is present. Thus, it does not show optical isomerism. Therefore, tartaric acid exists only in three isomeric forms out of which one is meso (optically inactive) and the other two are optically active i.e., d or (+) and I or (-).

→ There are certain molecules which do not contain chiral carbon atom but they are optically active such as biphenyls, allenes.etc. Actually, in these compounds, no element of symmetry is present. Due to this, molecules are not superimposible on their mirror images. Such molecules have molecular chirality.

→ Internal CompensatIon : Erythro group (III) and (IV) of tartane acid is called mesotartaric acid. In this, half part is dextrorotatory (d) and half is laeveo rotatory (l). So, in the plane of monochromic light, resultant displacement is zero. Due to these reasons, it is optically in active. 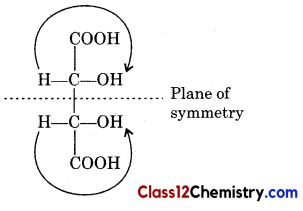 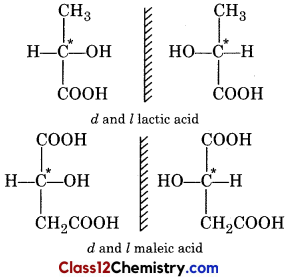 → These two acids are found in three forms, out of which two forms are d and ¡ form and third form is optically inactive because it is racemic mixture of two optically active forms. Third form is originated only when two forms (d-and i-form) are mixed in equimolar amounts. This third form is known as dl form 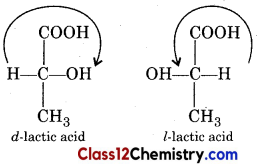 So lactic acids have three forms:

→ d(+) Tartaric Acid it can rotate the plane of polarized light towards right. 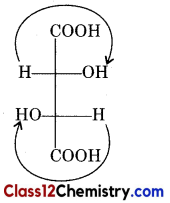 → l(-) Tartane Acid can rotates the plane of polarized light towards left . 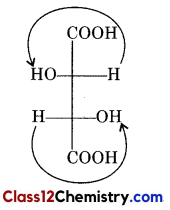 → Racemic Tartaric Acid or (dl) Tartaric Acid It is optically inactive due to ixternal compensation. It is a equimolar mixture of d and l-forms. 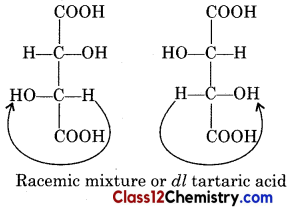