The important methods of preparation of alcohols are:

By hydrolysis of haloalkanes : When haloalkanes boiled with alkaline hydroxides like NaOH or KOH give alcohols.

→ If moist silver oxide (AgOH) is reacted with haloalkane then alcohols are formed.

→ By Acid Catalysed Hydration : Alkenes react with water in the presence of dilute acid as catalyst (H2SO4, H3PO4) to form- alcohols.

→ Step 1 : Alkene gets protonated to form a carbocation by the electrophilic attack of H3O+. 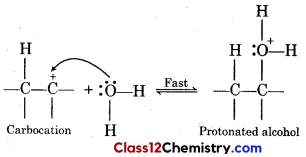 → Step 3 : Loss of H+ from oxygen (deprotonation) to form alcohol

By Hydroboratlon of alkene : By oxidation :

→ Diborane reacts with alkenes to give trialkyl boranes.

→ This is oxidised to alkanol by hydrogen peroxide in the presence of aqueous sodium hydroxide. In the complete reaction, addition of water to the alkene is according to Anti-markownikov’s rule. 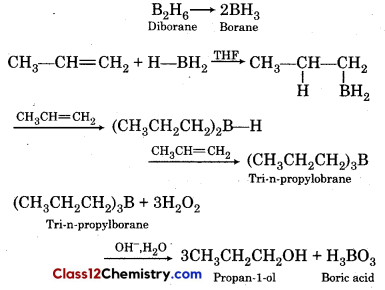 → The addition of borane to the double bond takes place in such a manner that the boron atom gets attached to the sp2 carbon carrying greatei aiiber of hydrogen atoms. In this reaction, alcohol is obtained in excellent yield.

→ By Oxy-Mercuratlon dmercuration : By reduction reaction of alkene with mercuric acetate (CH3COO)3Hg gives addition product, which on reduction in basic medium by NaBH4 yields alcohol. 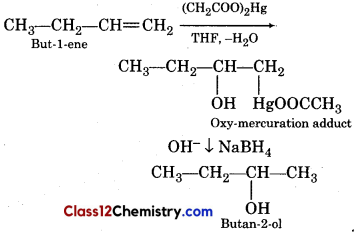 From aldehyde and Ketones

→ From Grignard Reagents : Grignard reagent reacts with aldehydes and ketones to form addition products which decompose with dii. HCl or dii H2SO4 to give alcohols. 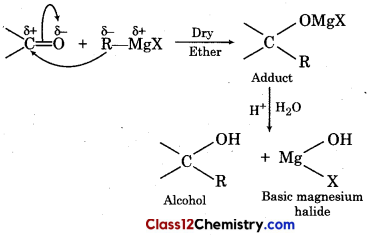 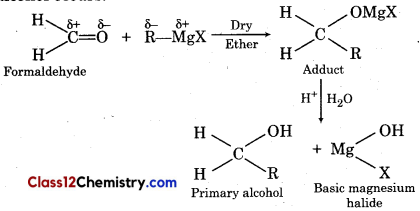 → Reaction with Ethylene Oxide or Oxirane : When Grignard reagent reacts with oxirane, an adduct is formed which on acidic hydrolysis forms primary alcohol. 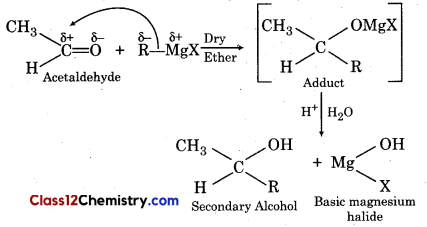 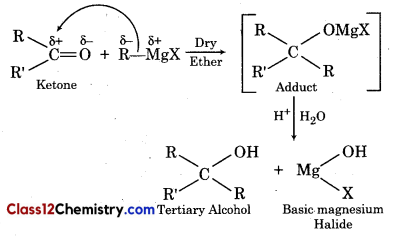 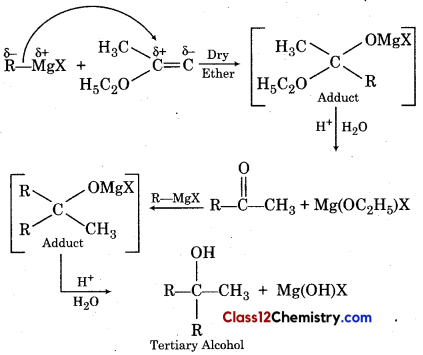 → By Reduction of Aldehydes and Ketones

→ Aldehydes give primary alcohols while ketones give secondary alcohols on reduction. Following reagents are used as reducing agent:

→ Catalytic hydrogenation of ester also leads to the formation of primary alcohol.

→ From Haloalkaries: Haloalkanes, when reacts with aqueous alkali like NaOH/KOH or moist Ag2O, give alcohols or alkanols. Order of reactivity of haloakanes is 3° > 2° > 1° therefore tertiary alkyl halides are most reactive.

→ By Hydrolysis of Esters : By the hydrolysis of ester in the presence of dilute mineral acids formation of carboxylic acids and alcohol occurs.

→ Methyl amine does not form methanol with HNO2. It forms methoxy methane. Formation of nitrous acid (HNO2) occurs by the reaction of NaNO2 and HCl during the reaction.

→ Fermentation done in absence of oxygen means it takes place under an aerobic conditions. During fermentation CO2 is evolved.