Method of Measurement of Conductivity by Wheatstones Bridge Chemistry Notes

Method for Measurement of Conductivity by Wheatstone’s Bridge :

→ The solution of electrolyte is taken in conductivity cell. This cell contains two electrodes of thin layers of platinum which are closed in two glass tubes and weld with platinum wires and surround the glass tubes by abonite due to which distance between electrodes does not change during experiment.

→ Copper wires of circuit are dipped in glass tubes filled with mercury. So, circuit is complete. Conductivity cell is connected with resistance box (R) from one end and with long and thin wire AB stretched at other end. Induction key, headphone are attached according to fig. 3.6. 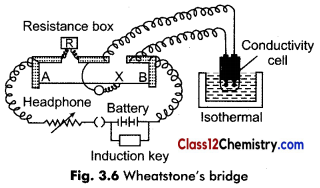