It includes 14-elementa i.e. from atomic number 58 to atomic number 71. In this series electrons enter in 4/-orbitals (perpenultimate orbital). These element are also known as rare earth elements because in past these elements were very rare but now a days this name is not appropriate as various elements of this series are not rare. Promethium (Pm) is the only element which is artificial and radioactive.

→ Where the value of n increases from 1 to 14 on increasing atomic number. The electronic configuration of ground state of Lanthanides is given in table 8.14

Table 8.14: Electronic configuration of Lanthanides with their stable oxidation state. 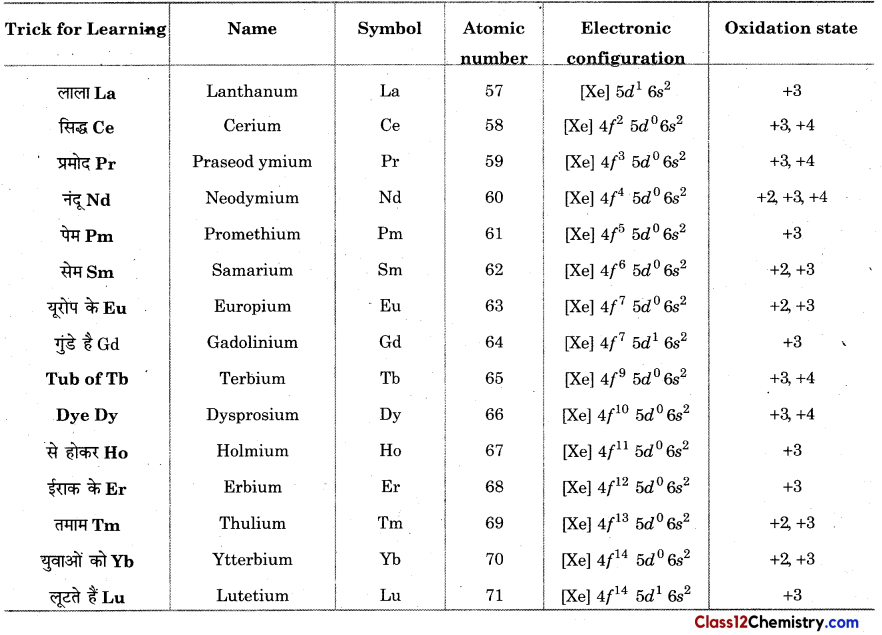 Some important striking features of electronic configuration of Lanthanides are as follow :

Besides 5d1 in Gd and Lu, 4f-subshell is either half filled or completely filled hence the stability of these elements are higher

Cause of Lanthanide contraction

→ On account of the very diffused shape of f-orbital, the 4f-electrons shield or screen each other quite poorly from the nuclear charge. Thus the effect of increased nuclear charge is somewhat larger than charged shielding effect.

→ Due to heigher nuclear charge than shielding effect, valane shell come close to nucleus, Hence the size of atom or ion goes on decreasing on increasing atomic number, However, this decraease in atomic radii is very small. This contraction is only about 10 pm from Ce to Lu.

→ Oxidation States General oxidation state of all the Lanthanides is +3. However, occasionaly they show +2 and +4 oxidation state in solution or in solid compounds in the form of ions. This irregularities on oxidation states are due to extra stability of empty. half filled or fullfilled of f-subshel.

→ The compounds of lanthanides are generally ionic in nature. There are some lanthanides which show +2 or +4 oxidation states yet they do not show f0, f7 and f14electronic configuration.

→ But it is a strong reducing agent and converts into Eu3+ form. Similarly Yb2+ (f14) is a reductant and Tb4+(f7) is an oxidant. Similarly like Europium exhibit both +2 and +3 oxidation state.

→ These values are quite comparable with those of calcium. Due to very low value of ioniation enthalpy, these elements are highly electropositive so these elements react cold and hot water to liberate hydrogen. However the reaction is slow with cold water but fast with hot water.

The colour fo some lanthanoid ions are given in table :

→ Magnetic behaviour: The lanthanoid ions which have unpaired electrons are paramagnetic while the ions like La3+(f0), Ce4+(f0), Yb2+ (f14) and Lu3+ (f14) are dimagnatic due to the absence of unpaired electron.

→ Chemical reactivity : Lanthanoids are highly electropositive and these elements are quite reactive similar to calcium. But as atomic number increases they start to behave like aluminium. These metals get tarnished on exposure to air. On heating with air they form oxides of the type M2P3– Only cerium show exception as it from CeO2.

The chemical reactivity of lanthanoides can be represented as:

→ The values of first three ionisation energies of transition elements are very less. Hence, these elements are ionic and +3 is the most stable oxidation state in these compounds. Their chemistry is also depend on Ln3+ ion.

→ Reaction with water : These elements react with water and release hydrogen gas. With cold water, reaction is slow whereas it becomes fast with hot water.

The baisc nature of hydroxides decreases from Ce to Lu.

Reaction with Hydrogen : These elements react with hydrogen at 300-400°C and forms non-stoichiometric hydrides like LnH2 and LnH3.

With Non-metals : These elements react with non-metals like carbon, nitrogen and sulphur to form compounds.

Lanthanoides are used in various industrial processes. Some important uses are as follow :

In nuclear science : Because of high thermal properties, certain lanthanide elements are very useful in some nuclear applications. These are as follow:

In glass and ceramics:

In magnetic and electronic instruments: