→ Compounds having the same molecular formula but differ in structures or spatial arrangements are called isomers and the phenomenon is referred to as isomerism.

→ Structural isomerism These isomers have different arrangement of ligands around the central metal atom/ion. It is of the following types: 1. Ionization Isomerism : This type of isomerism is due to the exchange of groups or ions between the coordination sphere and the ionisation sphere.

Such types of isomers yield different ions in solution:

→ Hydrate Isomerism : Compounds which have the same molecular composition but differ in the number of water molecules present as ligands are called hydrate isomers and phenomenon is known as hydrate isomerism.

→ Water is such a neutral species, which may appear in variety of ways. It may coordinate to metal ions or it may appear in interstitial lattice position. So, when different number of water molecules are present inside and outside the coordination sphere, this isomerism is arised.

→ Ligand Isomerism: Those co-ordination compounds in which ligands itself show isomerism are known as ligand isomerism.

→ Coordination Position Isomerism: This isomerism occurs in coordination compounds having bridging ligands where molecular formula is same but bonding of ligand is different in structural formula.
Example: 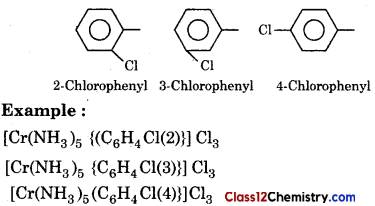 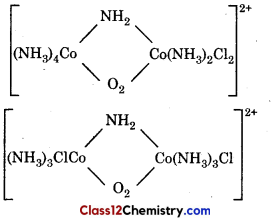 → Stereo Isomerism : Compounds are stereoisomers when they contain same ligand in their co-ordination sphere but differ in the way that these ligands are arranged in space. Stereo isomerism is of two types:

→ Geometrical Isomerism : This isomerism is due to the ligands occupying different position around the central metal atom.

→ This isomerism is not possible with co-ordination number 2, 3 and 4 (tetrahedral complexes).

→ It is quite common in coordination number 4 (Square planar complexes) and 6 (octahedral complexes).

→ Complexes with general formula Ma2b2 (where a and bare monodentate ligands) can show : Example: 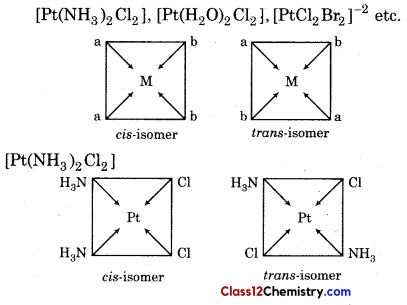 → Complexes with general formula Ma2 bc can show
Example : 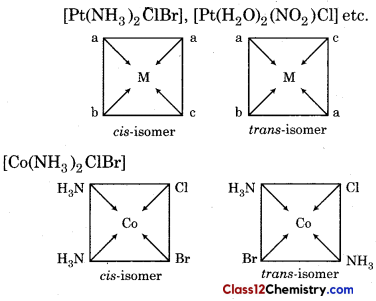 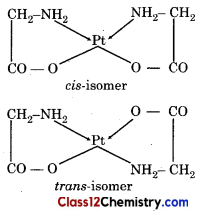 → In octahedral Complexes : In these complexes, the metal atom lies at the centre and centre of octahedral and 1 to 6 positions are occupied by the ligands. 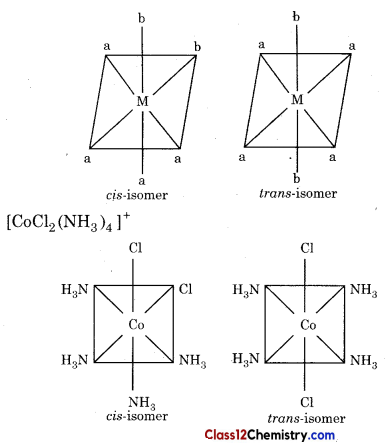 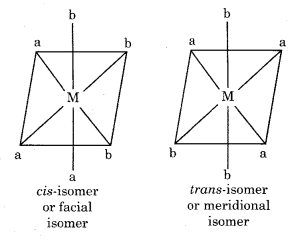 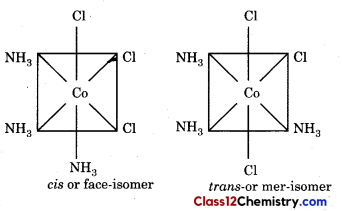 → In facial isomer, all similar ligands occupy positions on a plane while not in meridianal isomer. 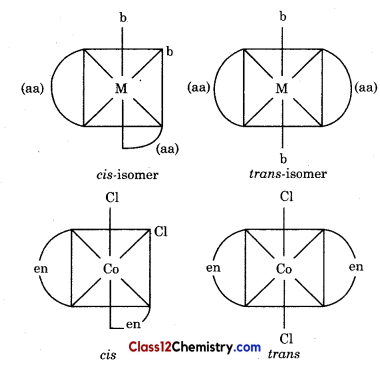 → Optical Isomerism : When the coordination compound have same formula but differ in their ability to rotate direction of the plane polarised light are said to exhibit optical isomerism.

→ The essential requirement for a substance to be optically active is that the substance should not have an element of symmetry in its structure.

→ Optical isomerism rarely occur in square planar complexes on account of the presence of axis of symmetry. 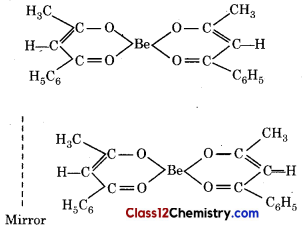 → Transform of M(aa)2 b2 does not show optical isomerism.
Example: M(aa)2 bc type 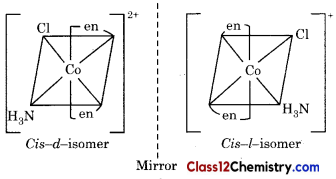 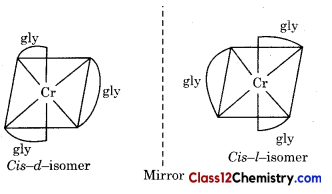