→ There is a proper arrangement of constituent particles in ionic crystals. The ionic crystal in which all the lattice sites have same type of unit cells, is called ideal crystal Although, such types of crystals are found at only absolute zero temperature (0 K). Crystals are deviated from proper arrangment at a temperature more than OK. Hence, any type of deviation from proper arrangement in crystal forms imperfection or defect. These defects are mainly irregularities in arrangement of constituent particles. These irregularities are called crystal defects.

Crystal defects are of two types

→ Such type of point defect does not effect the stoichiometry of solids. So, here the ratio of cation and anion in crystal is same as represented by chemical formula. It arises when equal number of cations and anions left its lattice site or any ion/ions is/are deviated from its lattice point.

→ Due to this, stoichiometry remains unchanged. Such defects are produced as a result of thermal vibrations of ions because of high temperature. So, these are also called intrinsic or thermodynamic defects. These are of following types:

→ Vacancy Defects : When some lattice sites are vacant in a crystal then vacancy defect is produced in crystal. It decreases the density of substance. This defect is also produced by heating the substance. (Figure 1.44).

→ Interstitial Defects : When constituent particles (atoms or molecules) in a crystalline structure are found in interstitial space then interstitial defects are produced. It increases the density of substance. This defect is found in non-ionic solids (Figure 1.45). 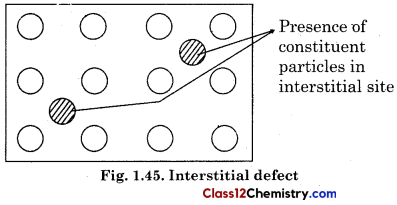 → Frenkel Defect: This defect is shown by ionic solids. When a small ion is missing from its actual position and comes in an interstitial site then the defect is called Frenkel defect. It is also called dislocation defect. In this defect, density remains unchanged. It is shown by those solids which have more difference in size of ions. The lattice point from where constituent particle displaces, remains vacant. It is called vacancy or hole. Since, in this type of defect, the number and charge of cations and anions in crystal are equal. It is a stoichiometric defect.

Examples : Zns, AgCl, AgBr. Agi etc. This defect is due to small size of Zn2+ and Ag+ ions. 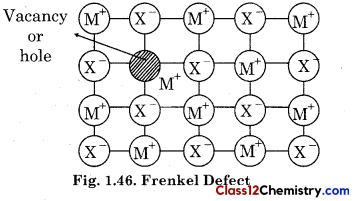 → Schottky Defect: This defect is shown by such ionic solids where coordination number is high and size of cations and anions is approximately equal. It is also a type of vacancy defect. Here, the equal number of cations and anions left the lattice site to maintain the electrical neutrality. So, pairs of holes are formed in compound. It decreases the density of crystal. Example – NaCl, KCI, CsCl, AgBr etc. Such type of defect in ionic solids is very important. 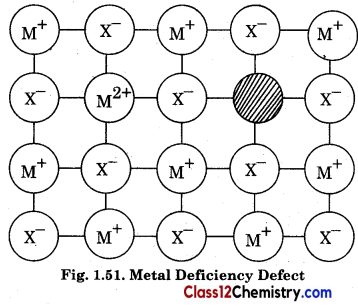 → If a small amount of SrCl2 or CdCl2 is added in melt of NaCl and it is crystallized then some places of Na+ are occupied by Sr2+ or Cd2+ ions. Each Sr2+ or cd2+ substitutes two Na+ ions to maintain electrical neutrality. It occupies place of one ion while other remains empty. The number of cation vacancies so obtained is equal to number of Sr2+ ions. Other examples – AgCl and CaCl2, KCl and SrCl2 etc. 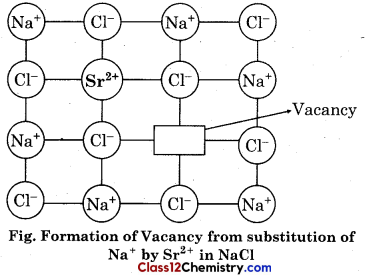 → The ratio of cations and anions present in crystals of many compounds is some what different from ideal chemical formula of that compounds. Such compounds are called non-stoichiometric compounds or Bertholide compounds.

Metal Excess Defect: It is also of following types

→When NaCl crystal is heated in an atmosphere of sodium vapours then sodium atoms deposit at the surface of crystal and Cl– ions on diffuses from crystal surface on the crystal surface Cl– ion reacts with Na+ ions to form NaCl. Electron which is produced in conversion of Na into Na+, occupies anionic position of crystal. Due to this reason, excess of sodium is found in crystal. This type of vacancy is generated when anion left its lattice site and to maintain the electrical neutrality, e– occupy this vacant site. 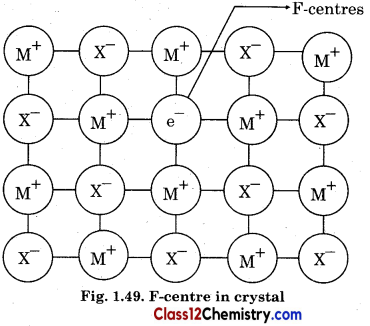 → Metal Excess Defect due to Presence of Cations at Interstitial Sites In this type of defect, cation occupies interstitial site. For example, the colour of zinc is white at room temperatures but converts into yellow colour on heating.

→ Here, excess of Zn is present in crystal and it occupies interstitial site. Electron occupy the interstitial site to maintain electrical neutralits. Due to these free electrons crystal is coloured, conductor and paramagnetic in nature. 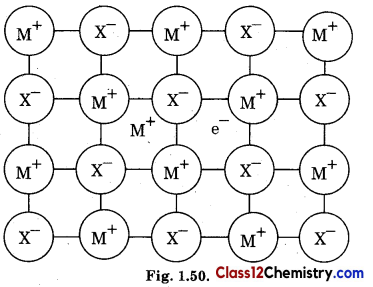 → Metal Deficiency Defect : Such type of defect is found in those metals which represent different oxidation numbers. Here, the amount of metal is less than stoichiometric ratio. Example – FeO, NiO etc. FeO is found mostly in composition of Fe0.95O. Here, some Fe2+ ions are disappeared from the crystal and positive charge is balanced by necessary number of Fe3+ ions.