→ Hydrogen chloride is a major industrial chemical. It is widely used as laboratory regent. First time in 1648 Glauber prepared it by heating the common salt (NaCl) with concentrated sulphuric acid (H2SO4).

→ In 1810, Davy proved that it is a compound of hydrogen and chlorine. When hydrogen combines with chlorine then a covalent compound HCl is formed. In anhydrous state it is not acidic in nature but in aqueous state it release H+ lona thus, it is also called hydrogen acids or hydra acid. Priestely called it ‘marine acid’ and Lavoisier called it ‘Quriotic acid’.

It can be prepared by the following methods:

→ Laboratory Method : In laboratory, it can be prepared by heating sodium chloride (rock salt) with concentrated sulphuric acid.

It can be dried by passing it through concentrated sulphuric acid

→ Above process can also be used for commercial preparation Commercially it can be manufactured by heating NaCl and conc. H2SO4 in Muffle furnace.

→ Industrial preparation in large scale HCI can be prepared as a byproduct from the heavy organic industry. It can be prepared during the conversion of 1.2.dichloroethane into vinyl chloride

Some important physical properties of hydrogen chloride are as follows:

→ Action on Htmus : Dry HCL cannot chnage the colour of litmus but its aqueous solution can tum blue litmus red which indicates that it is acidic in nature.

→ Its dissociation constant (Ka) is very high which indicates that it is a very strong acid in water. Some acidic properties of hydrochloric acid are as follows:

→ Reaction with bases : It reacts with bases like hydroxides, carbonates, bicarbonate of metals to form chlorides 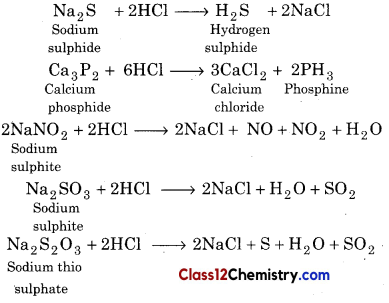 → Precipitation Reactions : HCl can form the precipitate of chlorides when it reacts with salts of Ag. Pb and Hg. 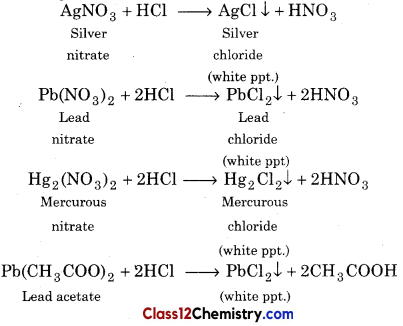 → Reaction with fluorine : Fluorine can displace chlorines from HCl

→ Oxidation : HCl can be oxidised by atmospherie oxygen in the presence of Cu2Cl2 catalyst at 723K temperature to produce chlorine PR This reaction is used in Deacon’s process. 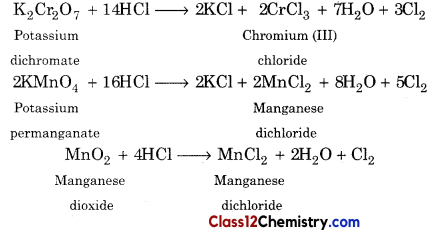 → Formation of Aqua regia: A mixture of three parts of concentrated hydrochloric acid and one part of concentrated nitric acid is known as aqua regia. In aqua regia HCl acts as reducing Agent while HNO acts us oxidising agent. Aqua regin is used to dissolve noble metals Nike Au, Ptete.