→ The group 18 of periodic table consists of Helium (He). Neon (Ne). Argon (Ar). Krypton Kr). Xenon (Xe) and Radon (Rn). It is also known as group. All are non-metals. The last elements i…radon is radioactive in nature.

→ All the elements of group-18 are monostomic gases at room temperature. These gases do not have chemical reactivity at ordinary room temperature so they are called as inert gues. However Xenon and Krypton have been used to prepare a number of compounde.

→ It shows that these gars are not completly inert. Hence, now a days they are called as noble goes instead of inert gases. The name noble gases is analogous to noble metals (gold platinum) which show very low chemical reactivity.

→ As the gases of group-18 have very low abundance on earth so they are also called as rare gases. The elements are also termed as zerovalent elements because they show mro valenty due to chemical inertnes. They are also known as Aerogen whose meaning is “presence in air”.

→ Except radon all the noble gases always occur in free state or elemental state in the atmophere. Their total percentage is about 1% by volume. In this percentage argon is about 0.83 which is the major component In natural gas the abundance of helium is about 2 to 7%. Helium with traces of neon sometimes hlso found in minerals of radioactive elements like pitch blende, clevite, monaite ete. Radon is radioactive hence, it does not occur in tree state because it decays very rapidly.

→ Helium, neon, argon also found in spring water. The relative presence of noble gases in atmosphere in terms of parta per million (ppm) is experied below:

The isolation of noble uses are given below:

→ Helium : Commercially helium is isolated from natural gases. Natural gas mainly contains hydrocarbona (methane + hydrocarbons upto six carbon atoma), but varying amount of carbon dioxide, nitrogen, hydrogen sulphide and helium which is about 2-7%. For the isolation of helium naturals is compressed to about 100 atm and cooled upto 73 K Under these conditions except helium all the other gases get liquified. By this method about 99% pure helium is isolated.

→ Neon, Argon, Krypton and Xenon. These and can be obtained by the fractional distillation of liquid air During fractional distillation of liquid air O2, N2 and mixture of noble anses are obtained Prom the mixture of noble cases, individual noble gases can be isolated by adsorption over coconut charcoal at different temperatures

Radom Radon can be obtained by the disintegration or decay of Radium. The half life of radon is 13.82 days

The physical properties of elements of noble gases are summarized in table 7.22.

Some important atomic and physical properties of elements of group-18 are discussed below:

→ Physical Surte All the noble gases are monoatomic, colourless and odourless. They are monoatomic due to the presence of stable configuration (ns2p6 ) Their monoatomie nature can be proved by the following two facts.

→ Solubility. They are non polar in nature hence sparingly soluble in water. Their solubility increase on increasing their atomie number.

→ Atomic Radii : In period, it is observed that on moving left to right from group 1 to group-17 the atomic radii decreases gradually but the atomic radii of noble gases is exceptionally higher than the corresponding elements of group-17.

→ On moving down the group the atomic rudii of noble gases incerases gradually from He to Rn because the number of shells increases.

→ Electron gain enthalpy or electron affinity : Due to the presence of stable configuration noble gases do not have tendency to accept additional electron. Therefore, their electron min enthalpy is positive because the electron will enter in an orbital of next energy shell and this process will require energy thus the process will become less positive because the size gradually increases from He to Rn.

→ Melting and Toiling Points: Due to presence od weak van der Waal’s forces of attraction betwen them they possess very low melting and boiling points in comparison to other elements of comparable atomic and molecular MAR But melting and boiling point increases with increase in atomic number because the van der Waals forces of attraction increase. Hence, on moving down the group m.p and b.p increes.

→ Thus helium has the lowest while radon has the highest melting and boiling point. m.p. and b.pa van der Waal’s forces of attraction atomic number

→ Heat of Fusion and Heat of Vaporisation : Generally, noble gases have very low value of enthalpy of fusion and enthalpy of vaporisation. But these enthalpies ince down the group on increasing Atomic number.

→ Ease of Liquefaction: The be of liquefaction depends upon the magnitude of the attractive foreer present between the atoms of molecules. The atoms of noble gases have weak vander waal’s force of attraction hence these cases cannot be liquefied easily. However, the magnitude of van der Waal’s forces of attraction increases on increasing atomie number hence on moving down the group the ease of liquefaction increase from He to Xe.

In genral noble R Are not reactive, their chemical inertness is due to the following reason

Discovery of Compounds of Noble Gases :

→ In above reaction PF6 oxidises O2 into O2+. Since O2 and xenon has some similarities such as:

→ Thus, Bartlett thought that PtF6 should oxidise Xe into Xe+. Then, he mixed Xe with PtF6 a rapid reaction occurred and a red coloured compound Xe+ [PtF6]– was obtained.

→ After the discovery of this compound a number of compounds of xenon are prepared because the ionisation enery of xenon is lower than other noble gas elemente Xenon form compounds generally with fluorine and oxyben because they have small size and high electronegativity.

→ The compounds of Krypton are fewer. Only the fluoride of Krypton (KrF2) has been studied in detail Radon is radioactive hence its compounds are not known. Only RnF2 is identified which is used in radio tracer technique.

→ Some important and table compounds of Xenone with fluorine and oxygen are given in table 7.23.

Table 7.23: Some stable Compounds of Xenon

Compounds of Xenon and Fluorine 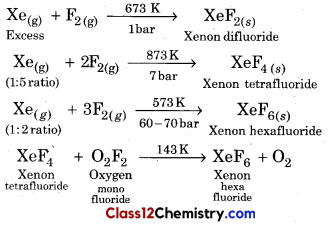 Reaction with water Xenon fluorides are easily hydrolysed even in trace of water. Different halides form different products with water. 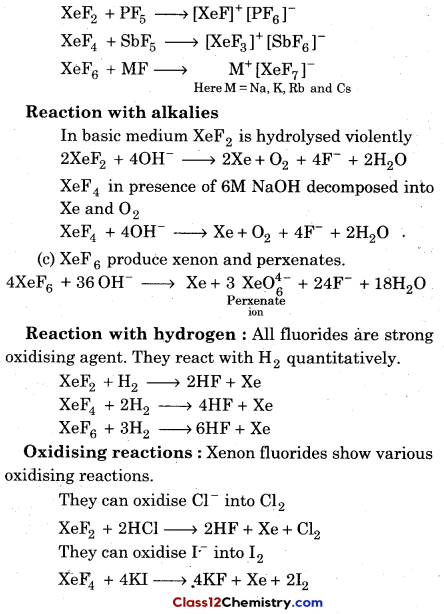 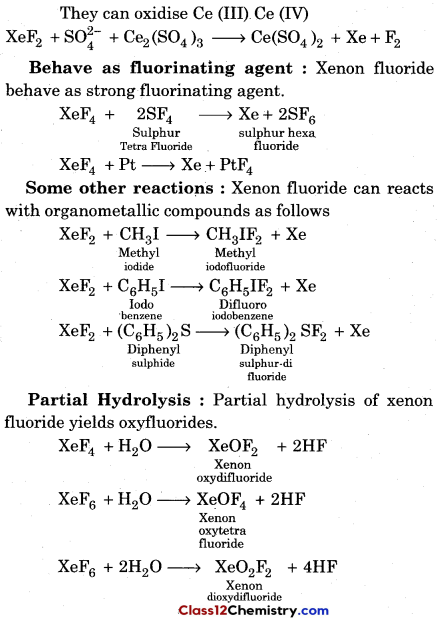 Compounds of Xenon and Oxygen

Preparation : Oxides of Xenon can be prepared by hydrolysis of Xe4 and XeF6.

Oxyfluorides like XeOF4 are prepared by the action of anhydrous or cone. H2SO4 on barium perxenate.

→ XeO3 reacts with base and farm monoalkali xenate, which slowly undergoes disproportionation to give xenon and perxenate. 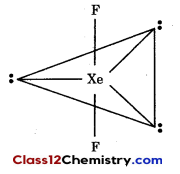 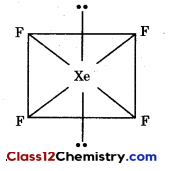 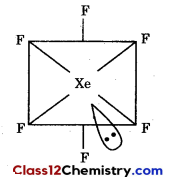 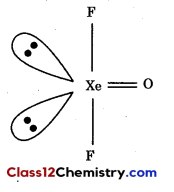 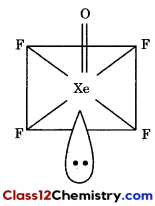 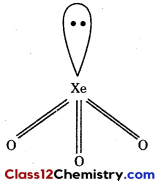 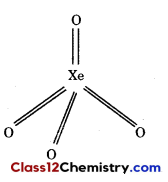 Use of Noble gases

Important use of Noble need are as follows