→ Group-16 of periodic table has five elements. These elements are Oxygen (O), Sulphur (S), Selenium (Se), Tellurium (Te) and Polonium (Po). The elements of group-16 collectively known as oxygen family or chalcogen (meaning ore forming elements) because various ores of metals occur in the form of oxides and sulphides. In this family, first four members are non-metal while Polonium (Po) is radioactive element. Polonium was discovered by Marie Curie in 1998.

→ Occurence : Oxygen is the most abundant element of all the elements on earth. Oxygen forms about 46.6% by mass of earth’s crust. Dry air contains about 20.946% oxygen by volume.

→ On the other hand, the abundance of sulphur in the earth’s crust is about 0.03-0.1%. Sulphur mainly exist in the form of sulphates and sulphides. Some common examples are as follows :

→ Except sulphides and sulphates, traces of sulphur is also occur as hydrogen sulphide in volcanoes, in spring waters, coal gas, sewage gas, etc. Organic materials such as eggs, proteins, garlic, onion, mustard, hair and wool etc. also contains sulphur. Other elements of Group-16 as selenium, tellurium and polonium are found in the form of selenides and tellurides in sulphides ores.

→ Polonium occurs in nature as a decay product of thorium and uranium minerals. Its life span is very short. Oxygen gas with helium or carbon dioxide is used for artificial respiration. Liquid oxygen is also used as oxidiser for the rocket fuels.

→ Sulphur is used as disinfectant for destroying bacteria, fungi, insects etc. Sulphur is also used in the vulcanisation of rubber. It is also used in sulpha drugs for curing skin diseases. It is used to prepare SO2, H2SO4 gunpowder, fireworks etc. 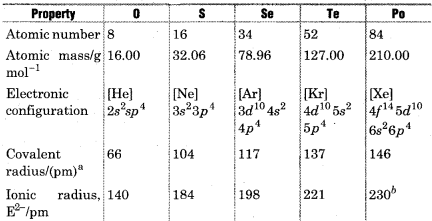 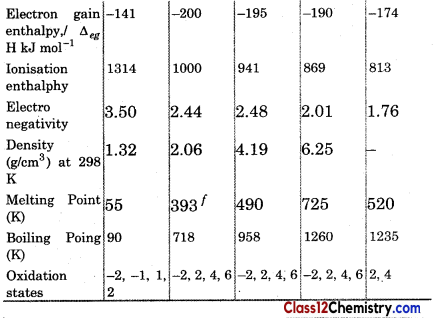 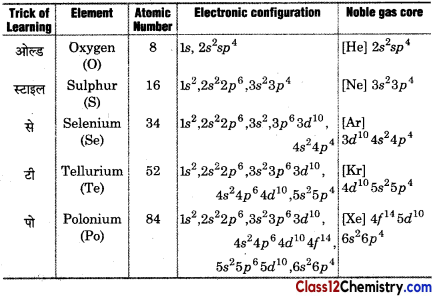 → Atomic and lonic Radii : On moving down the group the atomic radius of elements increases because number of shells increases

It can be understood with the values of ionisation energies of nitrogen and oxygen given below:

Metallic Character On moving down the group metallic character increases due to increase in atomic size.

→ Catenation : It is the tendency of an atom to form bonds with indentical atoms. In group-16 only sulphur has strong tendency for catenation, Oxygen also shows this tendency but in a limited extent.

The order of catenation is as follows :

→ As we know that sulphur shows maximum tendency of catenation, it is due to its high bond dissociation energy. Some examples of catenation are as follows :

→ The electron affinity of sulphur is greater than or more negative than oxygen. The low value of oxygen is due to its small size. As the size of oxygen is small, hence it has greater electron density which resists the addition of new electron. 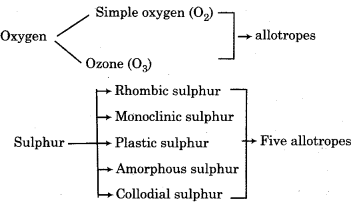 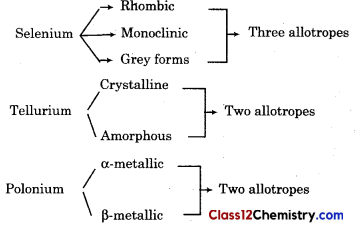 → States of elements : At room temperature, oxygen is gas while other elements are solids. The size of oxygen is small hence it has a tendency to form multiple pπ – pπ bonds with other elements.

→ Due to formation of pπ – pπ multiple bonding, oxygen (O = O) molecule exist in gaseous state furthermore its molecules are held together by weak vander Waal’s forces hence it exists as gas at room temperature.

→ On the other hand, Sulphur (S), Selenium and Tellurium (Te) exists as solid at room temperature. They exist as staggered 8-atom rings with sp3 hybridisation on each atom. S8 molecule has puckered ring like or crown shaped structure. 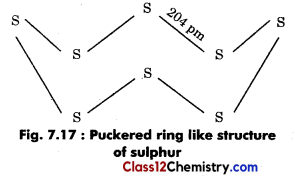 → Multiple Bonding : Except oxygen all the other elements of group-16 possess vacant d-orbitals in their valence shell. Hence these elements can form di-prt multiple bonding. Sulphur form comparatively stronger multiple bonding than other higher members of this group. For example,

The tendency to show-2 oxidation state decreases down the group

→ Other elements of this group can show +2, +4 and +6 oxidation state in their compounds. It is due to the presence of empty d-orbitals in their shells. It can be explained in diagram shown below :

→ The properties of oxygen are different from other elements. It is due to the following inherent characteristics

→ The main points of difference between oxygen and remaining members of group-16 are given below:

→ Trends in Chemical Reactivity Oxygen is the most reactive element of group-16. It can combine directly with almost all the elements i.e., metals as well as non-metals also. Its reactivity is slightly lesser than the halogens. The reactivity of the elements of group-16 decreases down the group

Some important trends in the chemical reactivity of group-16 elements are discussed below:

→ Reactivity towards hydrogen (formation of hydride) All the elements of group-16 form hydrides of the type H2E (where E = 0, S, Se, Te, Po). 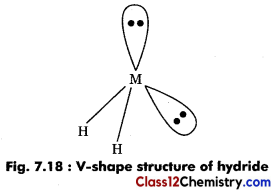 → Physical State : With an exception of water which is colourless, odourless liquid at room temperature, all other hydrides are pungent amelling gases. 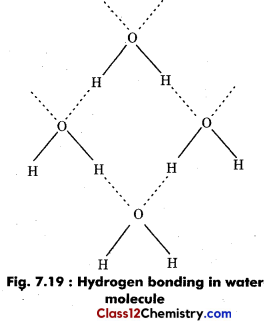 → Boiling and Melting Points : Boiling and melting points of hydrides increases down the group due to increase in vander Waals interaction. But the melting and boiling points of H2O is exceptionally high due to the formation of hydrogen bonding.

→ Reducing Character Except H,O all the other hydrides of the element of group-16 are reducing agent. Their reducing character increases down the group because thermal stability decreases.

→ Bond Angle : On moving down the group the bond angle of hydride decreases because as soon as the atomic size of central atom increases the repulsive interaction between unpaired electron decreases hence the bond angle also decreases.

→ Acidic character : All the hydrides of this family are weak acidic in nature. The acidic · character increases down the group because the tendency to donate hydrogen increases.

All the properties of hydrides of group-16 are summarised in table 7.12 :

→ Reactivity towards Oxygen (formation of Oxides) All the elements of group-16 reacts with oxygen and forms various types of oxides. These oxides are given in table 7.13.

Oxides of the elements of group-16 are discussed briefly as below :

→ Structure : In dioxides the central atom is sp hybridised. It is angular in shape. Both the bonds in SO, is similar due to the presence of resonance. In dioxides, there are two types of bond i.e., Pπ – Pπ and pπ – dπ bond. Due to presence of lone pair of electrons the bond angle is slightly lesser than the normal bond angle (120°).

TeO2 and PoO2 are crystalline ionic solid. They are non-volatile.

In solid state, SO3 exists as linear chain or a cyclic trimer. 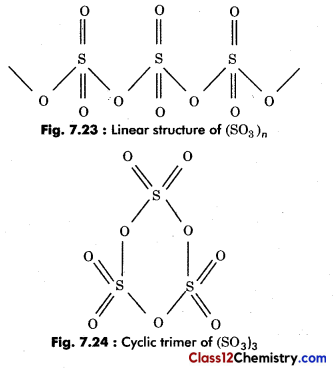 Solid SeO3 also form cyclic structure. It exists as tetramer. However, in vapour state SeO3 has a monomeric structure like SO3. 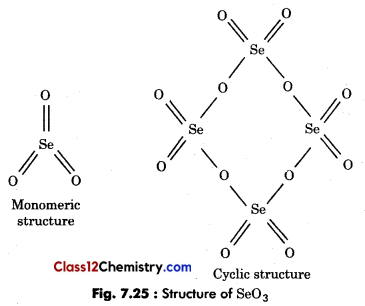 The oxidation state and physical state of these oxides are given in table 7.13.

Reactivity towards halogen (formation of halide)

The elements of group-16 form a number of halides. Some important halides are listed in table 7.14.
Table 7.14 : Halides of group-16

The properties of halide can be discussed as follows:

The structure of monohalide is similar to H2O2.

→ Dihalides : Except selenium all the other elements of group-16 form dihalides i.e. dibromide, dichloride. In dihalides the central atom is sp2 hybridised. Its structure is angular and geometry is tetrahedral. Due to the presence of two lone pair of electrons the bond angle is slightly less than 109.5°. 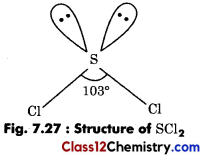 → There are sp3 hybridisation in tetrahalides. It have trigonal bipyramidal structure in which one equatorial position is occupied by one lone pair of electrons. It has see-saw shape. Due to presence of lone pair-bond pair repulsion the bond angle decreases from 180° to 173°. 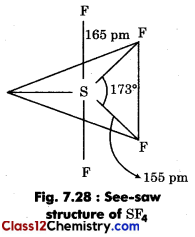 → SF6 is a colourless, odourless and non-toxic gas. It is thermally stable and chemically inert. The chemical inertness of SF, is due to the presence of six F-atoms. These six fluorine atoms protect the sulphur atom from attack by the reagents ie, sulphur atom is thermodynamically protected by six fluorine atoms.

All the hexafluorides are octahedral in shape in which sulphur atom undergoes sp3d2 hybridisation. 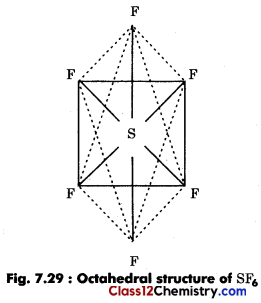