→ General characteristics of solid state are given below:

→ So, intermolecular or inter ionic forces of attraction are strong in solid state. Now if the temperatue of substance is increase then there is an increase in thermal energy due to which inter molecular forces become weak. As a result, the constituent particles move away from each other.

→ At a sufficient distance, a substance is transformed from solid state to liquid state. On further increasing the thermal energy, the distance between constituent particles also increases and as a result, a substance gets converted into gaseous state. 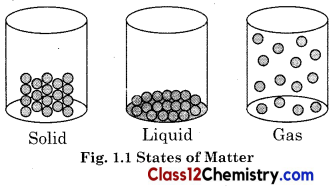