Dyes and Pigments Preparation and Properties

→ The natural or synthetic organic compounds impart colour to fabric are called dyes. In ancient times, for colouring fibres and fabrics, dyes are obtained from plants and other living substances. 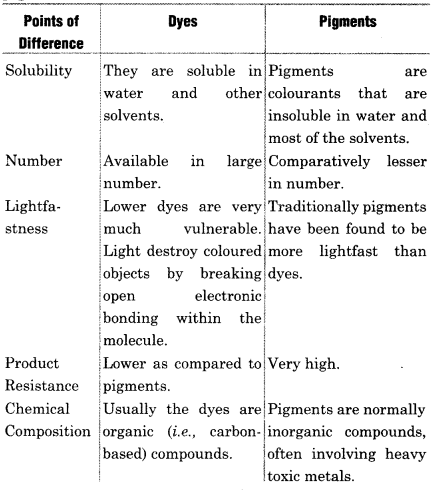 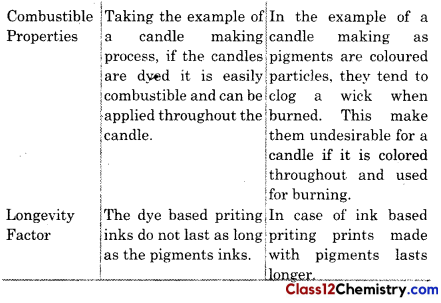 A dye have following characteristics:

→ But if some part of light is absorbed and some part is reflected, then a particular colour is observed. Visible light is mainly made up of seven colours : Violet, Indigo, Blue, Green, Yellow. Orange and Red. The wavelength of light increases from 400 nm to 750 nm as we move from violet to red. The colour of reflected light is complementary to the colour of absorbed light. For example, if a substance absorbs green colour then the substance is violet in colour. This means that violet colour is complementary to green colour.

→ Following table shows colour of absorbed light and their complementary colour in increasing order of wavelengths.

→ First useful dye was synthesised in 1856 by W.H. Parking who was only 18 years old at that time. He prepared violet dye by impure aniline which is basically 6-phenyl phenosafranine and its homologue.

→ Like the physical and chemical properties of organic compounds, there is a definite relationship between the colour and constitution. For example. benzene is colourless whereas its isomer fulvene is coloured compound. Grabby and Liebemian first of all explain the concept of colour and chemical structure.

→ In 1876, a German Scientist Otto Witt put forward a theory known as ‘Chromophore Auxochrome theory” or Witt Theory. Some of the important points of this theory are:

→ The colour of a substance is mainly due to the presence of an unsaturated group known as chromophore (Greek chroma = color, and phore = bearing). The important chromophores are: 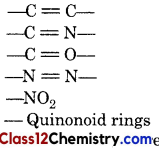 → The compounds possessing chromophores are referred to as chromogens. The higher the number of chromophores in a chromogen higher is the colour bearing capacity. The chromophoric groups are of the following two types.

→ When more than one chromophore is required to impart the colour, e.g, > C = O, > C = C < etc. This can be exemplified by various examples. Acetone (having one > C = O as chromophore) is colourless, whereas biacetyl (with two > C = O) is yellow.

→ Certain groups, while not producing colour themselves, when present along with a chromophore in an organic substance, intensify the colour. Such colour assisting groups are called auxochromes (Greek word, Auxanien = to increase; Chrome = colour), i.e., they make the colour deep and fast and fix the dye to the fabric. The auxochromes are acidic or basic functional groups. The important auxochromes are, 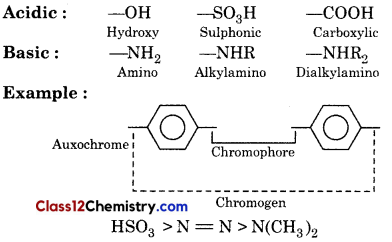 → It can be explained with the help of an example, azobenzene is a colourless compound but when NH2 group is introduced in it. p.aminobenzene is obtained which is a yellow colour dye.

Here, —N = N— is a chromophore whereas —NH2 is a auxochrome. 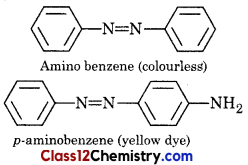 → According to Modern theories, structural properties of dyes can be explained on the basis of Valence Bond Theory and Molecular Orbital Theory. These theories are based on quantum mechanics which will be studied in higher classes.

Classification of dyes on the basis of Application

Dyes are used to colour fibres, fabrics, paper, leather. walls, food etc. On the basis of application, dyes are of following types:

vDirect Dyes : The fibres are soaked in hot solution of dye and then dries after taking out. These dyes applied directly to fibre and are more useful to the fabrics containing H-bonding like cotton, rayon, wool, silk and nylon, e.g., martius yellow, congo red etc.

→ Acid Dyes : These dyes are used in slightly acidic medium and are generally suiphoriic acid and its derivatives. These are water soluble and contain polar acidic groups which interact with the basic group of e.g., orange-I, congo red, methyl orange, etc. These dyes does not have affinity for cotton but are used for silk, wool etc.

→ Disperse Dyes : Disperse dyes are water insoluble. These dyes are finely grind and are available as a paste or a powder that gets dispersed in water. These particles dissolve in the fibres and impart colour to them. These dyes were originally developed for the dyeing of cellulose acetate but now they are used to dye nylon, cellulose triacetate and acrylic fibres too. 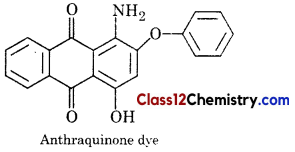 → Reactive Oyes : Reactive dyes react with fibres molecules to form a chemical compound. These dyes, are either applied from alkaline solution or from neutral solutions which are then alkalized in a separate process.

→ Sometimes heat treatment is also used for developing different shades. After dyeing, the fabric is washed well with soap so as to remove any unfixed dye. Reactive dyes were originally used for cellulose fibers only but now their various types ar used for wool, silk, nylon, acrylics and their blends as well. Example. prussian red.

→ Ingrain Dyes : These dyes are produced in dye solution during the process of dyeing. Ingrain dyes are those which are synthesized directly on the fabric.

→ Examples of this type of dyes are azo dyes. The fabric is immersed in the solution of coupling reagent (usually a phenol or naphthot). Then it is dipped in the solution of suitable diazonium salt. Both react to form the dye whose molecules are adsorbed on the surface of fabric.

→ The ingrain dyeing is particularly suitable for cotton fabrics. For example, if the fibres soaked in phenol or anthill are put in diazonium salts, then coupling reaction takes place at surface of fibre and insoluble azo dyes are adsorbed at the surface of fibres. Cotton, silk. polyester, nylon etc., are coloured by this process. These dyes are also known as ‘ice colours’ because they react at low temperatures.

→ Vat Dyes : These dyes are known from ancient times. Vat dyes are insoluble in water and cannot dye fibres directly. However, they can be made soluble by reduction in alkaline solution which allows them to affix to the textile fibres. Subsequent oxidation or exposure to air restore the dyé to its insoluble form. Indigo is the original vat dye. These dyes are the fastest dyes for cotton, linen and rayon. They are used with mordants to dye other fabrics such as wool, nylon, polyesters, acrylics and modacrylics. 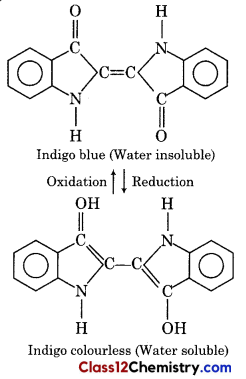 → Mordaflt Dyes : These are applied with the help of a binding material (e.g., metal ion, tannic acid or metal hydroxide) called mordant. Depending upon the metal ion used, the same dye can give different colours. The mordant or chrome dyes are acidic In character. Sodium or potassium bichromate is used with them in the dyebath or after the process of dyeing is completed. This is done for getting the binding action of the chrome. They are mostly used for wool which gets a good colour fastness after treatment with mordant dyes. They are also used for cotton, linen, silk, rayon and nylon but are 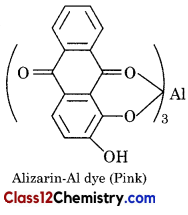 → less effective for them. Alizarin is an important example of such dye. It gives pink colour with aluminium ions and blue colour with beryllium ions. 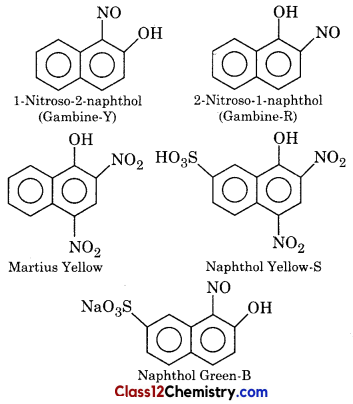 Classification of dyes on the basis of Structure

→ Nitro and Nitroso Dyes : These are ancient known dyes. These dyes contain nitro or nitroso groups as the chromphores and -—OH as auxochrome. A few examples are, 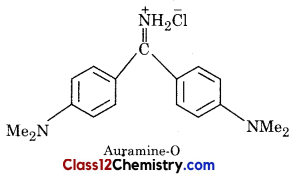 → Diphenyl Methane Dyes : These dyes have basic structure of diphenyl methane. For example, auramine —O is an important dye of this group which is used to colour silk, wool, paper, jute etc. 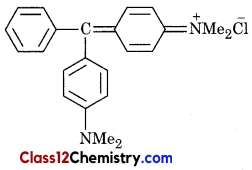 → Triphenyl Methane Dyes : These dyes are amino derivatives of triphenyl methane. Many dyes are included in this grup. For example, malachite green, an important dyes which is used to colour wool and silk directly. 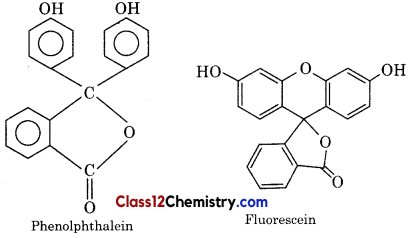 → Phthalein and Xanthe Dyes : The compounds formed by combination of pthalic anhydride and phenolic compounds are known as phthalein. Xanthene ring structure can also be included in this group. For example, phenolphthalein has phthalein as a ring structure and fluorocene is a xanthene derivative. 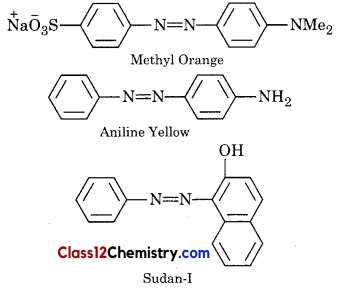 → Azo Dyes: It is the largest group of synthesised dyes which contains almost all the colours. Dyes characterised by the presence of an azo group (—N = N—) as the chromophore, whereas group like —NH2 —NHR, —NR2, —OH etc. are present as auxochromes. Azo dyes are found in many of the synthetic dye classes. Almost all are fast dyes. Examples are methyl orange, aniline yellow, sudan —I etc.

→ Indigo Dyes : This is the most important group of natural dyes. The dye stuff is extracted from Indigofera tinctorki, a bush pea family. The dye was used pre historically in India, where it probably originated. The word is derived from “Indican”. 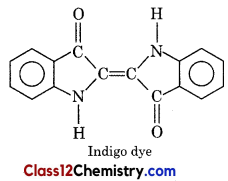 → These dyes are characterized by good fastness to light. They form complexes with metal salts and the resultant metalcomplex dyes have good wash fastness. This dye can be used with mordant dye where it gives different colours with different ions. Alizarin is an important member of this group.

→ Heterocyclic Dyes : In these dyes. at least one odd cyclic ring should be present. It is also a large group and new dyes are discovered. Example, acriflavine dye is used in calico printing, dyeing, medicine etc. 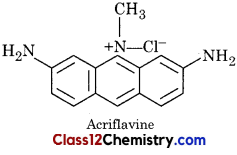