→ When two hydrogen atoms of an alkane are substituted by halogen atoms, the compound obtained is known as di-halogen derivative.

On the basis of adjacent position of both halogen atoms, dihalogen derivatives are divided in to three parts:

→Gem-dihalides: If both halogen atoms are attached to the same carbon atom, the compound is known as gem-dihalide. For example,

→ Vic.Dihalides : In these compounds two halogen atoms are attached to adjacent carbons. For example,

→ α, ω-Dihalide : If halogen atoms are attacked to th€ first carbon and last carbon atom of carbon chain, then they are known as α, ω-dihalides. For examples,

→ From Alkynes : By treating with halogen acids. 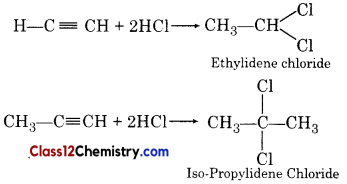 → From Carbonyl Compounds : By treating with PCl5. 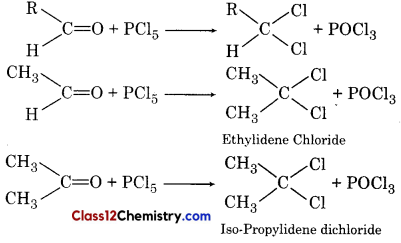 → From Alkenes : Vic-dihalides are formed by treating halogen with ethene in the presence of CCl4.

From Glycol : Vic-dihalides are formed by the action of PCl5 on glycol.

α, ω DhaIide : When Silver salts of dicarboxylic acids reacts with bromine in the presence of CCl4.
α, ω-dihalides are obtained. This reaction is known as Hunsdicker reaction.

Dihalogen derivatives are colourless, sweet smelling liquids. They are insoluble in water but soluble in organic solvents. They are heavier thaii water.

Chemical reactions of di-halo deri”atives are similar to mono-halogen derivatives. Some reaction are as follows:

→ Hydrolysis : Gem-dihalides get hydrolysed with aqueous KOH or AgOH to give aldehyde or ketone whereas vic-dihalides gives glycol. 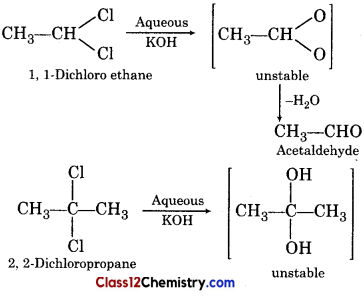 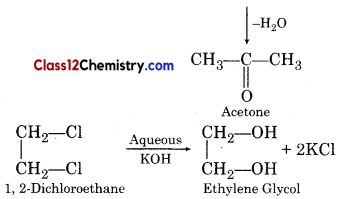 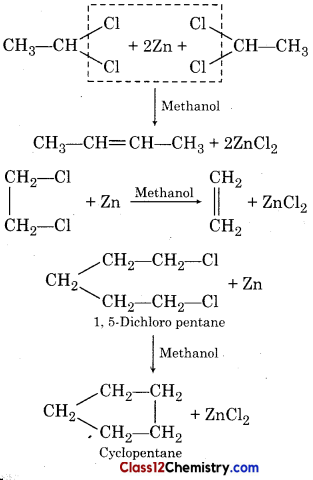 Mono and dihalo derivatives has the following uses: