→ The soft soaps do not contain free alkali, produce more lather and are used as toilet soaps, shaving soaps and shampoos. The process of formation of soap is known as saponification. In our country, soaps are obtained from coconut oil, mustard oil, soyabean oil etc.

→ Oils and fats are structurally similar but carbon chains in oils are unsaturated but saturated in case of fats. For this reason, van der Waal’s forces in fats are comparatively stronger. This is the reason that oil, are liquid and fats are solid at room temperature. For example, 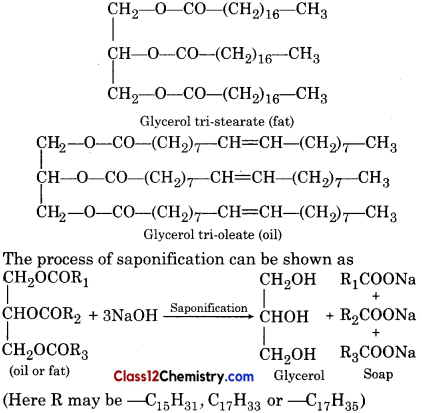 → It is clear from the above reaction that 3 moles of NaOH react with 1 mole of oil or fat and gives 3 moles of soap. A mixture of soap and glycerine is obtained which is known as ‘lye’. Soaps and glycerol are separated by adding salt. Soap is insoluble in salt solution and thus precipitates out due to common ion effect and glycerol remains in the solution.

→ Hard Soap : These are prepared by t.he reaction of NaOH with cheap oils. These are used for’ the washing clothes.

→ Soft Soap : It is prepared by the reaction of KOH with high quality oils. It is used for manufacturing both soap, shaving cream and shampoos, colour and perfumes are used in them for making attractive.

→ Transparent Soap : After evaporation at solution of bathing soap in alcohol transparent soaps are prepared. In this glycerol is used.

→ Sea’s Soap : These soaps gives lather in sea’s water also, e.g., soap which are made by coconut oil.

→ Shaving Soap : Soap which are used for shaving are prepared by using gum of glycerol and resin. They give proper lather.

Cleansing Action of Soap : A molecule of soap has two parts.

→ As hydrophilic part is polar, these polar groups can interact with the water molecule present around the oil droplet. As a result, the oil droplet is pulled away from the surface of the clothing water to form ionic micelle which is then washed away with excess of water. In fact, the stearate ions of the soap molecules helps in making a stable emulsion of oil with water which is then washed away with water. A sheath of negative charge is formed around the globule which prevents them to come together and form aggregate.

→ Sodium p(1,3,5,7)-tetra methyl octyl benzene suiphonate. These molecules has one ionic end (hydrophillic) and other one is long hydrocarbon chain (hydrophobic). Hydrophobic end is known as tail which is soluble in dirt and grease. Their structure is similar to detergents. 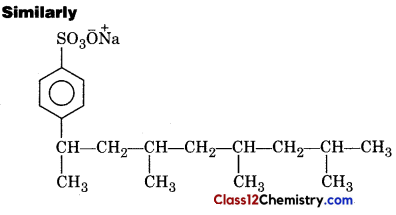 → Differences between Soaps and Detergents Both soaps and detergents are cleansing agents but detergents are superior to soaps because of the following reasons:

→ Soaps cannot be used in hard water since calcium magnesium ions present in hard water produce curdy precipitate of calcium and magnesium salts. These insoluble salts separate as scum in water and causes hinderance to washing because the precipitate adheres on to the fibre of the cloth as gummy mass. Thus, a Iot of soap is wasted if water is hard. On the other hand, synthetic detergents can he used even in case of hard water.

→ Soaps cannot be used in acidic solutions since acids precipitate the insoluble free fatty acids which adhere to the fabrics and thus, reduce the ability of soaps to remove oil and grease from fabrics whereas synthetic detergents can be used in the acidic medium.

→ Synthetic detergents have a stronger cleansing action than soaps.

→ Detergent maintains its cleaning power better than soap over a long period of time. For household managers who are looking to economize, this means they can purchase the larger size of detergent at a lower unit cost and not have to worry that its cleaning ability will subside while in storage.

→ It consumes fewer natural resources in the manufacturing process than soaps. Detergents are primarily made from synthetic materials while soap is comprised of vegetable oils and fatty acids. Synthetic detergents are maily classified into three categories:

→ Anionic Detergents : These are sodium salts of suiphonated long chain alcohols or hydrocarbons. They have anions at the soluble ends of the chain.

→ In such detergents, the anionic part of the molecule is involved in the cleansing action. They are mostly used for household work and in tooth paste.

→ Cationic Detergents : These are quaternary ammonium salts of amines with acetates, chlorides or bromides as anion. They have cation at the soluble ends of the chain. Cationic detergents are used in hair conditioners. They have germicidal properties but are expensive therefore, these are of limited use. 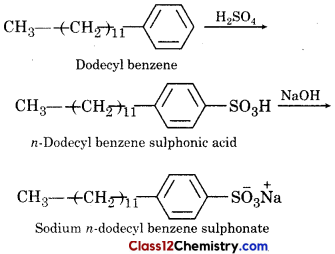 → Non-ionic Detergents : They have hydrogen bonding at the soluble ends of the chain. They are either monoesters of polyhydric alcohols or polyethers derived from ethylene oxide. Such detergents does not contain any ion in their constitution.

→ One such detergent can be obtained by reaction of stearic acid and polyethylene glycol. Liquid dish washing detergents are non-ionic type, Mechanism of cleansing action of this type of detergents is the same as that of soaps. Example is pentaerythrìtol stearate.