Chemical Properties of Aldehydes and Ketones Preparation and Properties

The chemical reactions of carbonyl compounds can be classified in following groups:

→ Mechanism of Nucleophilic Addition Reactions : The reason of activity of aldehyde and ketone is due to the presence of polar > C = O bond in them. As oxygen is more electronegative hence it attracts electron density towards it therefore partial negative charge develops on it on the other hand partial positive charge develops on carbon atom.

→ For initiating the reaction a nucleophile attacks on positively charged carbon atom and a intermediate is formed which further convert into product after the attack of H+ . A nucleophile attacks the electrophilic carbon atom of the polar carbonyl group from a direction approximately perpendicular to the plane of sp2 hybridised orbitais of ca rbon atom as shown in the figure 12.3. given below.

→ The hybridisation of carbon changes from sp2 to sp3 in this process a tetrahedral alkoxide intermediate is formed. This intermediate capture a proton from the reaction medium to give the electrically neutral product. The net result is addition of Nu– and H+ across the carbon oxygen double bond.

→ This reaction is named as nucleophilic addition reation due to attack of nucicephile in slow step of the reaction Relative Reactivity of Aldehyde and Ketone :

→ Aldehydes are generally more reactive than ketones in nucleophiic addition reaction. The more reactivity of aldehyde in compare to ketones can be explained by followoing reasons:

→ Inductive Effect : The attack on carbonyl group is easy when positive charge on carbonyl carbon is more i. e., when carbon is electroii deficient means it is more electrophilic.

Some of the important nucleophilic substitution reactions of aldehyde and ketones are as follows: 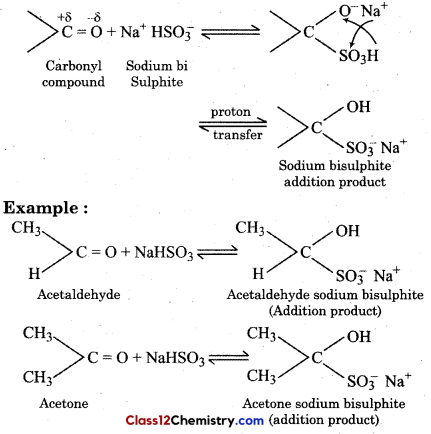 → The addition product can be decomposed by mineral acid or sodium carbonate solution to give back the original aldehyde or ketone. Therefore the reaction can be used in separation of aldehyde and ketones from other non-carbonyl compounds.

→ Addition of Hydrogen Cyanide : Aldehydo and ketone reacts with sodium cyanide and dii H2SO4 then one molecule of hydrogen cyanide adds on carbonyl group to form cyanohydrin. 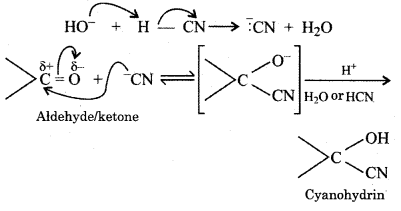 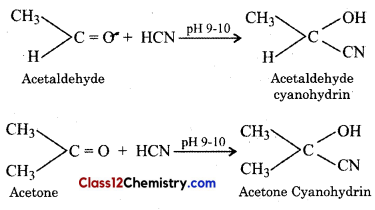 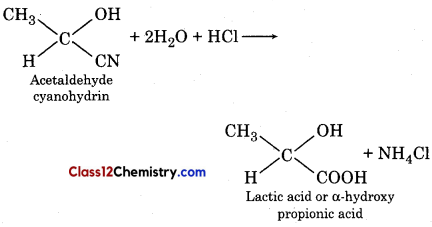 → Addition of Grignard’s R.ag.nt : Aldehydes and ketones add with Grignard’s reagent and forms additional product which on hydrolysis gives alcohol. 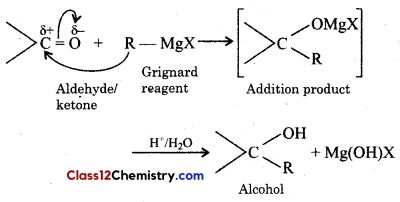 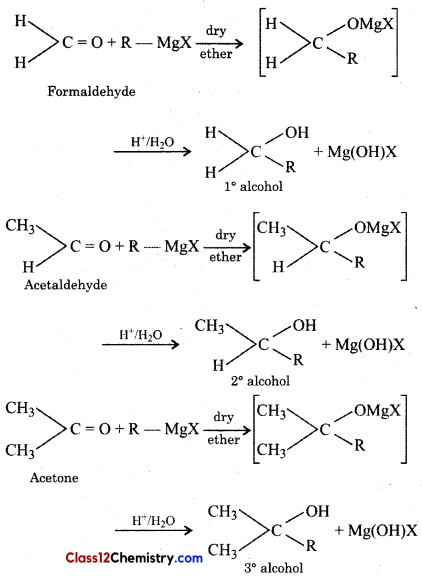 → Addition of Alcohols-Acetal and Ketal FormatIon : Aldehydes react with alcohols in the presence of dry HCl gas to give acetals. In the reaction an intermediate is formed. This intermediate is alkoxy alcohol which is termed as hemiacetal also. It is a unstable compound and reacts further with another molecule of alcohol to form gem-dialkoxy compound or acetal.

→ Acetal hydrolysed by dilute mineral acids to give back the original aldehydes.

→ If we express ammonia derivative as NH2 — Z (Z = OH, NH2, NHC6H5, NH CONH2 etc.) then the formation of product can be represented as follows:

→ The reaction is reversible and catalysed by acids. Some important names and structure of ammonia derivatives and their products are given below :

→ Reaction with Hydrazine : Aldehyde and ketone reacts with hydrazine and form hydrazone.

→ There are two NH2, groups in semicarbazide but only one involved in the formation of semicarbazone. The NH2 group closer to carbonyl group is deactivated due to resonance stabilisation

→ In nucleophilic attack of ammonia and its derrivatives pH of the medium must be carefully controlled to about 3.5 (medium is weakely acidie). In strongly acidic condition NH2 — Z will aslo be protonated to form NH2+ – Z and it will not be able to be act as a nucleophile.

→ This precipitate is dissolved in ammonium hydroxide. On warming any aromatic or aliphatic aldehyde with freshly prepared ammonical silver nitrate solution (Tollen’s reagent), the aldehyde reduces tollen’s reagent to metallic silver and bright silver mirror is produced on the inner side of the test tube. That’s why it is called silver mirror test. Sometimes silver metal does not precipitate as mirror but precipitate as black precipitate. Reaction of the test are as follows:

→ When aliphatic aldehyde is heated with fehlings reagent a reddish brown precipitate is obtained because Cu(OH)9 is converted into red colour Cu9O. The following reactions occurs in this reduction

→ halogen in aqueous NaOH, then haloform is formed (e.g. chloroform, Bromoform, lodoform). In this reaction ketone and aldehyde oxidised to sodium salt of carboxylic acid with one less carbon atom

→ Reaction with Shift’s Reagent : Aqueous solution of rosaniline hydrochloride is pink in colour. When sulphur dioxide passed through it. It becomes colourless which is known as Schiffs reagent. When aldehyde reacts with Schiff’s reagent, pink colour again appears.

→ OxIdation of Ketones : Unlike aldehydes ketone do not have any hydrogen atom attach to > C = O group. Hence, ketone can not oxidise without cleavage of double bond. So ketone can not oxidises with weak oxidising agents like Tollen’s reagent, Fehiing solution. These reagents are used to differenciate between aldehyde and ketones.

→ By Strong Oxidising Agent : Ketone is oxidised by strong oxidising agents only like conc. HNO3, KMnO4 / H2SO4, K2Cr2O2 / H2SO4 etc. Their oxidation involves carbon-carbon bond cleavage to obtain a mixture of carboxylic acids having lesser number of carbon atom than the parent ketone.

→ It can be understnd by following example: 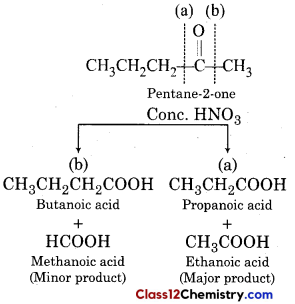 → Oxidation by Sodium Hypohalite-Haloform Reaction : lodoform reaction is used as test to distinguish between the molecules in which one

→ Reduction to Alcohols : In presence of metallic catalyst such as Pt, Pd, Ni aldehyde and ketone reacts with molecular hydrogen to form primary alcohols and secondary alcohols respectively. 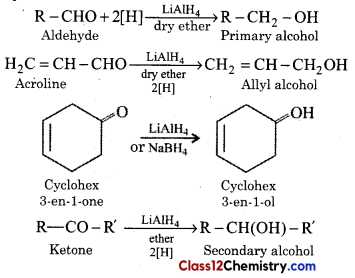 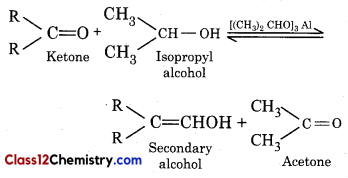 → Reduction In Hydrocarbon : It has following reactions : Clemmensen’s Reduction : In this reduction carboxyl group (> C = O) is reduced to methylene group (>CH2). It is carried out with zinc amalgam and concentrated hydrochloric acid.

→ Reduction by Red Phosphorus and Hl : Aldehyde and ketones when heated with red phosphorus in the presence of HI at 424 K then alkanes are obtained.

→ Wolf Kishner Reduction or Hung-Milnon Reduction : When hydrazones of aldehyde and ketones are treated with sodium ethoxide at 453 K, the nitrogen gas releases and alkanes are obtained. This reaction is called wolf kishner reduction.

→ The yield of alkanes in this reaction is more than obtained in Clemmenson’s reduction. But both wolf kishner reduction and clemmenson reduction generally effected by sterically hindered ketones.

Hence, Hung Milnon modified the wolf kishner reduction. Accordîng to him when aldehyde and ketone reacts with hydrazine, KOH and diethylene glycol (HOCH2CH2 —O—CH2CH2OH) at 473 K then alkanes are obtained. 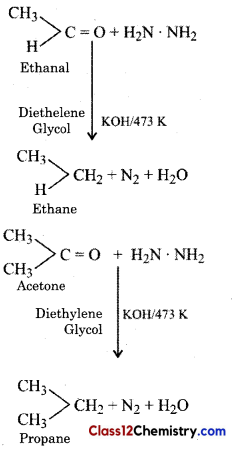 → Reduction to Pinacols : When ketones are reduced with water and magnesium amalgam, pinacols are obtained. 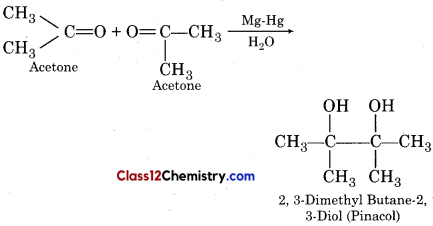 → Reaction with Alkalies : Reactivity of a-hydrogen of aldehydes and ketones.

→ Acidic Behaviour of a-Hydrogen : In carbonyl compounds the hydrogen atom attach with that carbon which is bonded with carbonyl group is called a-Hydrogen. Carbonyl group have (—I) inductive effect. It attracts the electrons of the adjacent carbon-carbon bond. Due to which a-carbon becomes deficient of electron.

→ To fulfill the deficiency of electron a-carbon atom attracts electron from CαH bond towards itself. Because that a-hydrogen is weakly bonded. When carbonyl compound reacts with strong base then bases easily removes H-atom attached with a-carbon and carbanion is formed. Carbanion gains stability due to resonance. 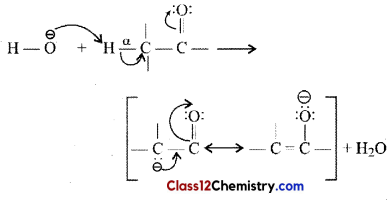 → The two reasons for the activity (acidity) of a-hydrogen are as follows: The (—I) effect of carhonyl group which weakens the Cα —H bond and

→ The carbanion formed by elimination of W shows resonance and gains stability. Inductive effect or —I effect decreases along the carbon chain as the distance increases. That’s why the inductive effect (—I) of carbonyl group affect only α—H atom. That means β-, γ-, δ- etc., hydrogen does not show acidic character.

→ aldehyde or f.hydroxy ketone. As the product have both aldehyde and alcohol group that’s why it is called ‘Aldol’ and this reaction i called as ‘Aldol addition. 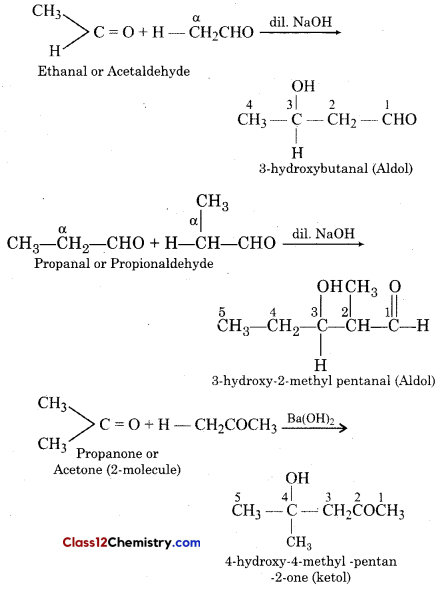 → Formaldehyde, benzaldehyde and benzophenone does not give aldol condensation as they do not contain α-Hydrogen atom.

→ Step 1 : In the first step the base removes acidic α-hydrogen atom to form an enolate ion. The enolate ion gets stabilized by resonance.

→ Step 2 : The enolate ion being a strong nucleophile attacks the carbonyl group of the second molecule of acetaldehyde and form anion (I). 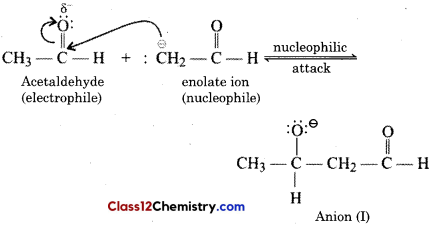 → Step 3 : Anion (I) abstract a proton from water to form aldol and hydroxide ion. 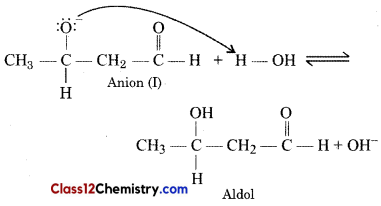 → The product formed from aldol addition on heating with dilute acid forms α-β unsaturated aldehyde and ketone by dehydration. (Now it is known as Aldol condensation reaction) 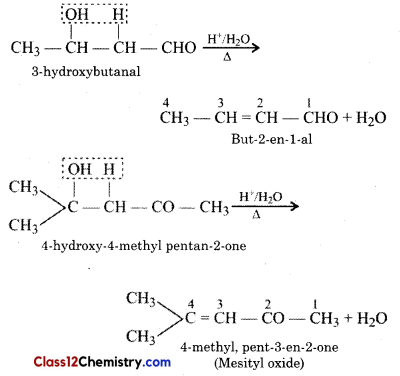 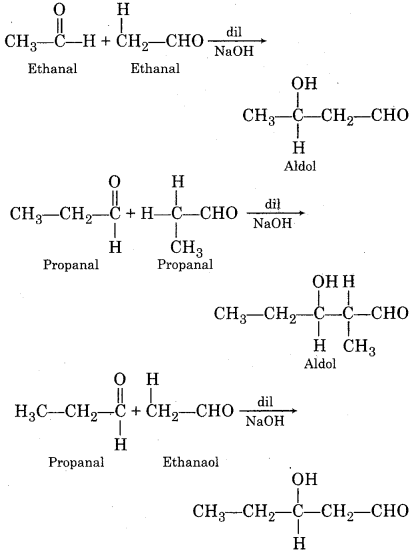 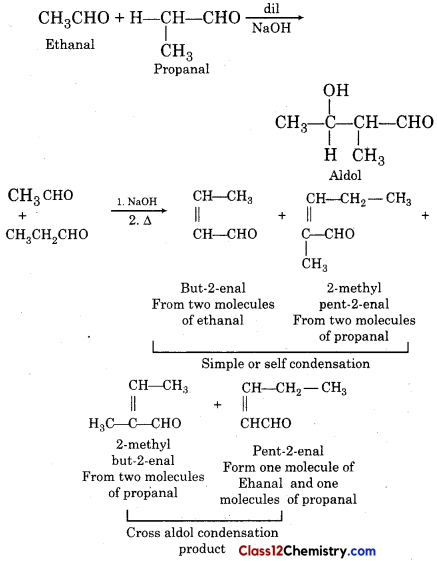 → Ketones can be used in cross aldol condensation.

→ Halogenation : When aldehydes and ketones having a-hydrogen react with halogen in the presence of acid or base, then a-halogen is replaced by halogen atoms. Poly halogenatîon occurs ‘n the presence of a base. 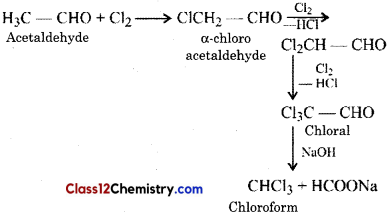 → Monohalogen derivatives is formed in the presence of acid.

→ In presence of excess of halogens di and tri substituted products are formed.

→ Cannizaro’s ReactIon : Aldehydes which do not have ana-hydrogen atom, undergo self oxidation and reduction (disproportionation) reaction on heating with concentrated alkali. In this reaction, one molecule of the aldehyde is reduced to alcohol while another is oxidised to carboxylic acid salt

→ Above reactions are disproportionation reactions as one molecule oxidises and other reduces here. 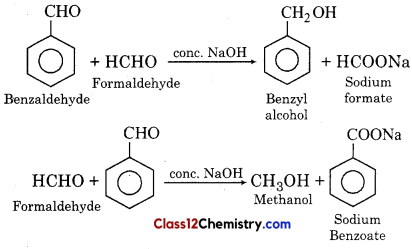 → Reaction with Ammonia : Aldehydes except formaldehyde reacts with etheric solution of ammonia to form aldehyde ammonia adducts. The adduct on warming loses a water molecule and form aldimine. 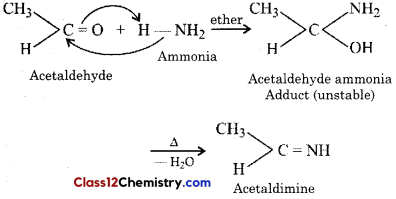 → Formaldehyde reacts with ammonia to form hexamethylene tetraamine which is used as a medicine to treat urinary infections and it is konwn as urotropine. 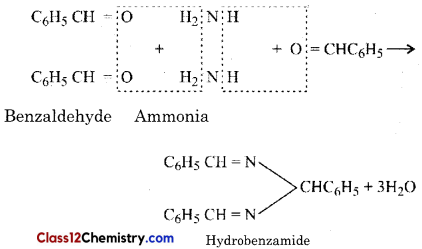 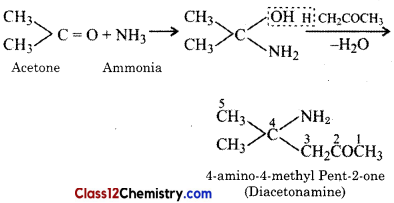 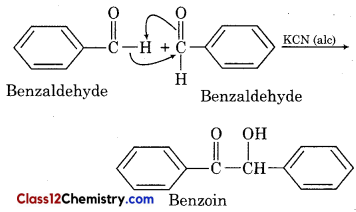 → Reaction with Chloroform : Ketone condenses with chloroform in the presence of base and forms addition product.

Example – acetone forms chioretone which is used as hipnotic.

→ Reaction with Phosphorous Pentachioride : When aldehyde or ketone reacts with PCl5, the oxygen the oxygen of carbonyl group is substituted by two chlorine atoms and gem dihalide are formed.

→ Reaction with Primary amines : Aldehyde and ketone in presence of catalytic amount of acid reacts with primary amine to form azomethene or schiffs base.

→ When an aqueous solution (40%) of formaldehyde (formalin) is evaporated to dryness on a water bath, it forms a white solid called paraformaldehyde
(CH2O)n H2O here n 6 to 50

→ When an aqueous solution (60%) of formaldehyde reacts with few drops of conc. H2SO4 it forms polyoxyxnethylene (CH2O)n, H2O. Here n > 100. It is insoluble solid in water and on heating gives formaldehyde.

→ When gaseous formaldehyde is allowed to stand at room temperature it gives trioxane or metaformaldehyde.

→ 6 molecules of formaldehyde when reacts with Ca(OH)2 solution combiiies to form formose (C6H12O6) which is sugar and isomer of glucose.

→ Polymerization of Acetaldehyde : When acetaldehyde is treated with a few drops of cone. H2SO4 at room temperature (298 K), rapid exothermic reaction occurs with the formation of a cyclic trimer called paraldehyde. Paraldehyde is sweet smelling liquid (B.P.-410 K) and is used in medicines as hypnotic.

→ When acetaldehyde reacts with few drops of conc. H2SO4 or dry HCl gas at 273K it forms cyclic tetramer known as metaidehyde. 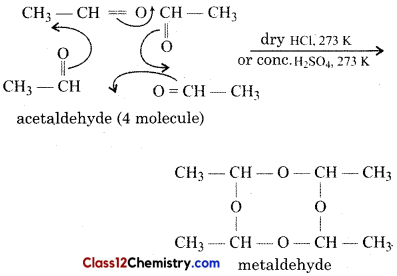 → It is white solid of melting point 519K which again forms acetaldehyde on reacting with dii H2SO4.

→ Since aldehyde group (—CHO) and ketonic group (r—COR or —COAr) are electron withdrawing so they are deactivating and rn-directing. In other words the electrophilic substitution reactions in aldehyde and ketones occurs at m-position.

→ Halogenation : Nuclear halogenation is hard in aromatic aldehyde and ketones but side chain halogenation occurs very rapidly. so when Cl2 is passed over benzaldehyde in cold, benzoyl chloride is formed.

→ Generally, when acetone reacts with Br2 in ether in pressence of catalytic amount of AlCl3 at 273 K then phenacyl bromide (Bromoacetophenone) is formed.

→ when acetophenone reacts with Br2 in excess of anhydrousAlC3, m-bromoacetophenone is formed. 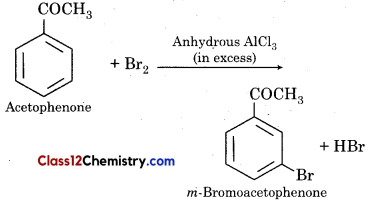 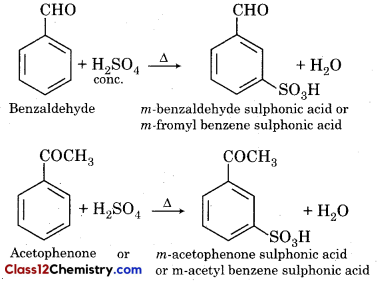 → Tischenko Reaction : When an aldehyde reacts in the presence of aluminium ethoxide, [Al(OC2H5)3] acid and alcohols are obtained which react with each other to form ester. This reaction is called Tischenko reaction.

→ Distinction between Aldehydes and Ketones

→ Similarities between Aldehydes and Ketones : Aldehyde and ketones both have carbonyl group. Thus, they both show some type of nucleophiic addition and nucleophilic elimination reaction which have been described in chemical properties.