→ Halogenatlon : When diethyl ether is heated with chlorine or bromine, then hydrogen atom present on α-Carbon of ether gets substituted by halogen atoms. 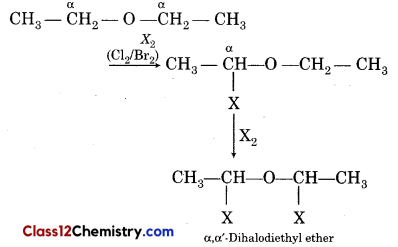 → Formation of Peroxide : Diethyl ether reacts with oxygen from air or ozone to form peroxides.

→ If ether is left for long time in air then its self oxidation occurs and 1-ethoxy ethyl hydro peroxide forms which is explosive in nature. 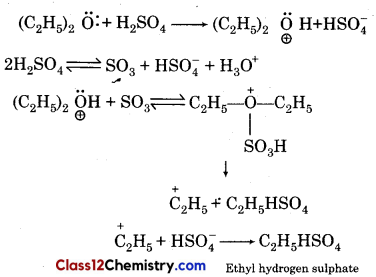 → Ether act as Lewis base with electron deficient compounds and form oxonium salt.

→ When excess of hydrogen halide is taken then alkyl halide and water are formed as end product:

The order of reactivity of Halogen acids is

→ Zeisel Method : Use of reaction of methyl ether with HI is done in the quantitative analysis of methoxy groups. This method is known as Zeisel method.

→ When reaction of mixed ether is carried out with hydrogen halide, then according to the nature of alkyl group (Pri mary/Secondary/Tertiary) different products are formed. 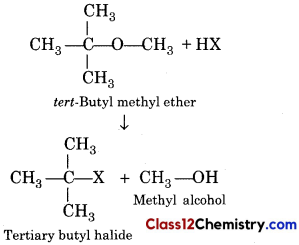 → If Alkyl groups attached to mixed ether are primary and secondary then primary and small alkyl group form halide and reaction occurs through SN2 mechanism. 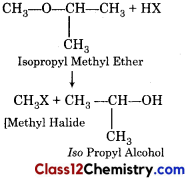 → If one akyl group is tertiary then alkyl halide forms by tertiary alkyl group.

→ HydrolysIs : When ether is heated with dii. H2SO4 at high pressure, then ethanol forms.

→ Reduction : When diethyl ether is reduced in liquid Ammonia with Na, alkane and alkanol are formed.

→ When heated with red phosphorus and HI ethane forms.

→ Reaction with Acetyl Chloride : When ether reacts with acetyl chloride in the presence of anhydrous ZnCl2, ethyl acetate and ethyl chloride forms.

→ Reaction with Acetic Anthydride When ether is heated with acetic anhydride in the presence of anhydrous ZnCl2, ethyl acetate forms.

→ Dehydration : When vapours of diethyl ether are passed over alumina at 653 K temperature, water molecule eliminates and ethene forms.

→ Reaction with Carbon Monoxide: Ether forms ester with CO in the presence of BF3 catalyst and water at 500 atm pressure and 398-423 K tempeature.