→ When more than one calls are attached in series then battery is obtained. In fact, battery is an arrangement of Galvanic cells in series. Battery converts chemical energy of redox reaction into electric energy. There are of two types of batteries:

→ Primary Batteries – In primary batteries, reaction takes place only once and battery becomes inactive after some time and can not be reused again. These are of following types:

→ Dry Cell – It was discovered by Leclanche. So, it is called Leclanche cell. It is used generally in transistors and watches. This cell contains a zinc pot which acts as anode and the rod of carbon graphite, which is surrounded by powdered manganese dioxide and carbon, acts as cathode. The place between electrodes is filled with moist paste of ammonium chloride (NH4 Cl) and zinc chloride (ZnCl2). In this cell, electrode reactions are complex but these can be written simply as follows: 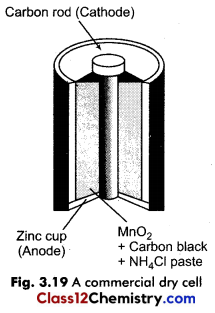 → In cathode reaction, manganese is reduced from +4 to +3 oxidation state. Ammonia produced in the reaction forms a complex [Zn(NH3)4]2+ with Zn2+ ion. The cell potential is approximate 1.5 V The age of dry cell is not so high; since NH4Cl corrodes zinc apparatus due to acidic nature when the cell is not used.

→ Mercury Cell – Mercury cell is used in hearing devices, watches etc. which require less amount of electricity. In this cell, zinc-mercury amalgam acts as anode and HgO and paste of carbon acts as cathode. The paste of KOH and ZnO is electrolyte. The electrode reaction of cell is given below: 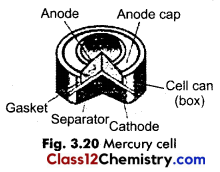 → Secondary or Storage Batteries – These are reversible Galvanic cells. In these batteries, the substances having high energy produce electric current on rapid reaction and become inactive. These substances made active again by external sources and those substances are used again in cell. So, these cells can be recharged again. Storage battery can be discharged and charged many times. Main examples of these batteries are as follow:

→ Lead Storage Cell – In this cell, anode is made up of lead and cathode is lead grid filled with PbO2.
It contains 38% H2SO4 as electrolyte.

Following reactions take place in it: 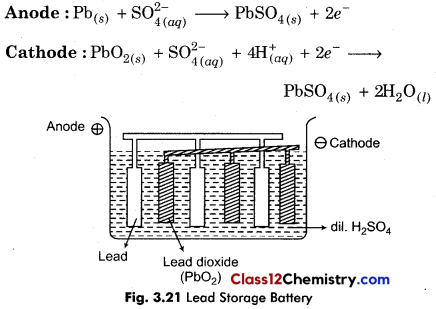 So, net reaction of cathode and anode is given below:

Nickel Cadmium Storage Cell-It is an important storage cell whose working period is more than lead storage battery but its costing is more. Its discharge reaction is given below: 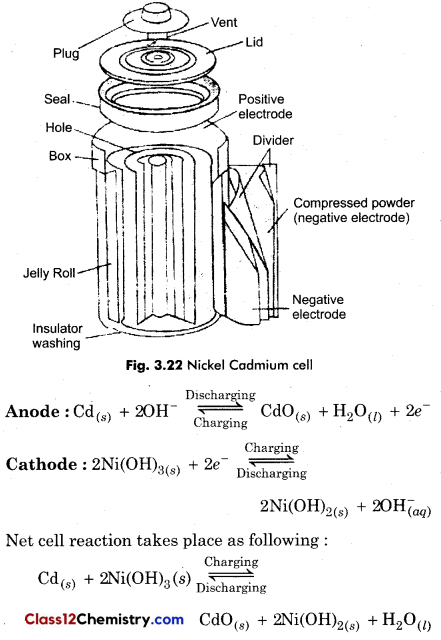 Difference between Primary and Secondary Cell :