Adsorption of Gases on Solid Adsorbents :

→ The adsorption of gases on solid adsorbents depends upon following factors: 1. Nature of Gas being adsorbed : The nature of physical adsorption is not specific. So, each gas is adsorbed at the surface of solid in low or high amount. But the gases, which are easily liquified, such as SO2, HCl, CO2, NH3 etc. are readily adsorbed than stable gases such as H2, N2, O2, etc., The rate of liquification of the gas depends on critical temperature.

Example : The decreasing order of adsorption of gases on 1 g activated charcoal is as follows:

→ “The relationship between amount of adsorption and pressure of gas at constant temperature is called adsorption isotherm”. 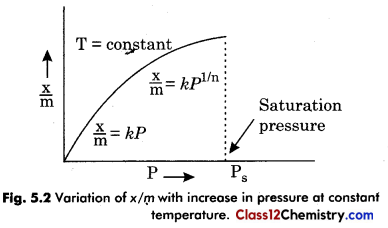 → Effect of Temperature : As we know that the adsorption is an exothermic process hence on increasing temperature, extent of adsorption decreases at a constant pressure.

→ The physical adsorption or physisorption decreases on increasing temperature because of breaking of weak van der Waal’s forces due to increase in kinetic energy of adsorbed gaseous molecules. 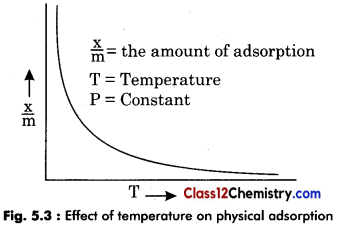 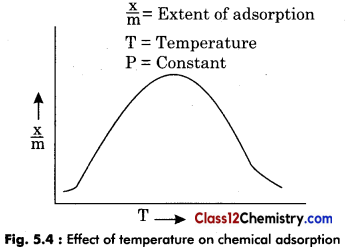 → In 1909, Freundlich gave an empirical relationship between the quantity of gas adsorbed by unit mass of solid adsorbent and pressure at a particular temperature. 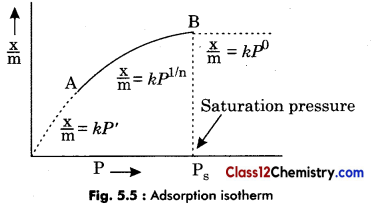 → At Intermediate pressure : At intermediate pressure the extent of adsorption will depend on Praised to powers between 1 and Oie, fraction. Hence,
\(\frac{x}{m}\) ∝ p1/n
\(\frac{x}{m}\) = kp1/n Where n > 1 ………….. (3)
In above equation n is a positive integer. Here in equations ‘n’ and ‘ are two constants and their values depend on the nature of adsorbate and adsorbent at a particular temperature. This equation (1) is known as Freundlich adsorption isotherm.
The value of kand n can be calculated as follows.
Taking logarithms on both sides of equation(1), we get
log = \(\frac{x}{m}\) = log k + \(\frac{x}{m}\) log P 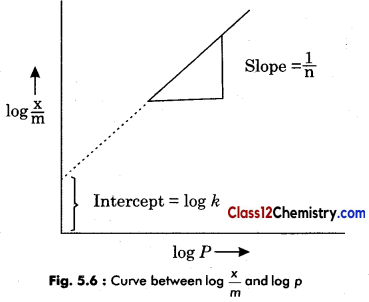 The main drawbacks of Freundlich adsorption isotherm is as follows: