When two or more than two simple stable compounds are crystallised together at a fixed ratio, and their solution is evaporated, crystals of new compounds are formed. These substances are called molecular or addition compounds. 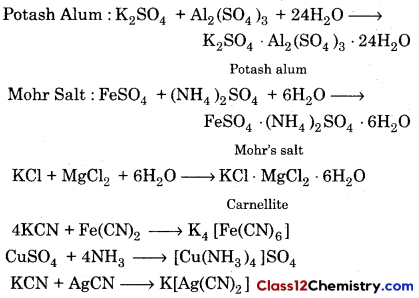 Addition compounds are of two types:

→ Double Salts: These are also called lattice compounds. These compounds are stable in solid state but break into individual constituents when dissolved in water. Their solutions have the same properties as the mixture of individual compounds.

→ Complex Compounds : These are also called coordination compounds. Complex compounds are those addition molecular compounds which retain their identity in solid state as well as in dissolved state. They do not show properties of constituent ions separately.

→ In these compounds, the central metal atom or ion is linked by ions or molecules with coordinate bonds. They do not dissociate into simple ions when dissolved in water. Example: K4 [Fe(CN)6] formed by KCN and Fe(CN)2 in aqueous state does not show the properties of Fe2+ and CN– ions.