→ Acidity of an acid depends on proton giving capacity of acid. Carboxylic acid dissociates in water to give a hydronium ion and the carboxylate ion.

→ The strength of acid is expressed by acid dissociation constant. According to aw of mass action, equilibrium constant can be given as:

→ The value of Ka is depend on temperature. From the equation it is clear that value of Ka is directly proportional to hydrogen ion concentration. Thus Ka is measure of strength of acid.

→ The value of Ka will be greater if hydrogen ions concentration is more i.e. ,the dissociation of acid will be increased and the acid will be strong. Thus, by comparing the values of Ka, the strength of various acids can be compared.
For convenience pKa values are used in place of Ka values.

→ The negative logarithm of Equilibrium constant is termed as PKa.

Reason for the acidity of carboxylic acids

→ Carboxylic acid is resonating hybrid of structure I and II.

→ Because of the presence of positive charge On oxygen atom it attracts electron of O—H bond towards it. As a result O—H bonds become weaker and releases proton after dissociation. The proton is responsible for acidic nature of carboxylic acid.

→ On releasing proton conjugate carboxylate anion is resonance stablised by the following way: 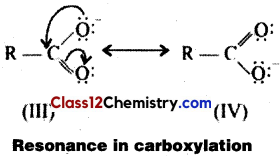 → Carboxylic acid molecules dissociate to form more stable carboxylate anion and shows acidic character. In carboxylate anion charge is not transferred to oxygen atom but delocalised between both oxygen and carbon atom. Due to resonance, both the oxygen carbon bond lengths are equal. Their values are between C—O and D = O bond length.

→ From the above discussion, it is clear that due to resonance in both carboxylate ion and carboxylic acid, double bond character decreases. Thus they do not show characteristic retion of carbonyl compounds like nucleophilic addition reaction and addition elimination reaction.

→ Comparison of addic character of Alcohols and Carboxylic acids

→ This is due to fact that both carboxylic acid and carboxylate chain are resonance stabilised but neither alcohol (ROH) nor alkoxide ion (RO–) are resonance stablised Alkoxide ions are unstable because alkyl groups are electron releasing in nature and hence increases the intensity of negative charge on oxygen atom. 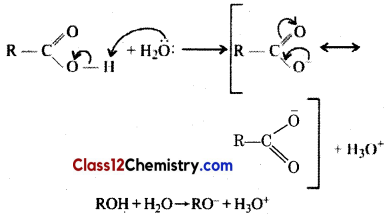 Camparison of addic character of Phenol and carboxylic add

→ Carboxylic acid and phenol both have acidic tendency but carboxylic acid are stronger acid in compare to phenols. To understand the reason of this, have to compare the resonating structure of carboxylate ion and phenoxide ion. 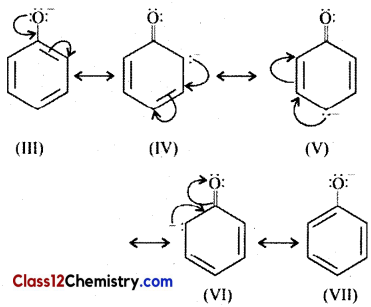 → In found phenoxide the structures (IV-VI) the negative charge is at the less electrongegative carbon atom. Therefore, resonance stablization in phenoxide ion is not so important and can be neglected.

Effect of Substituents on the Acidic sftength of Carboxylic acid

→ The group having —I effect attracts electron towards itself which decreases the electron density on O—H bond. The O—H becomes weaker and releases proton easily and also stablised the carboxylate anion formed after the remova’ of H+ through delocalisation of negative charge.

Example : The electron attracting inductive effect (—I effect) in halogen atom of chioroacetic acid is as follows:

→ Increase In acidity due to —I effect of chlorine Order of —I effect of halogen is as the following:
F > Cl > Br >I
Thus, the order of acidity in α-haloacid is as follows :

→ The acidity increases with increases in number of electron attracting group.

→ The inductive effect decreases repidly with increasing distance. The acidity decreases as the distance of carboxylic group from the group of—I effect increases. 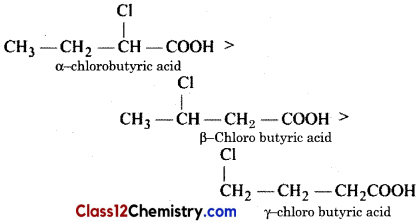 → If the nature of substituents present in carboxylic acid molecule is such that it makes removal of H + difficult and makes tarboxylate anion unstable then the acidic strength of acid decreases for example the acidic strength of carboxylic acid decreases in presence of electron repelling group (+ I effect + I effect of alkyl groups are in the following order:

→ On this basis the acidic strength of carboxylic acid follow the following order:

→ The acidity of formic acid is more than acetic acid

→ The methyl group present in acetic acid has +1 effect. it increase the electron density in O—H bond. Which makes the removal of H+ difficult and because of electron releasing nature of methyl group the delocalization of negative charge does not occur therefore the stability of acetate ion decreased.

→ Phenyl group have electron attractive (—I inductive effect) nature when phenyl group is direct attach to carboxyl group it increases the acidity of carboxylic acid. 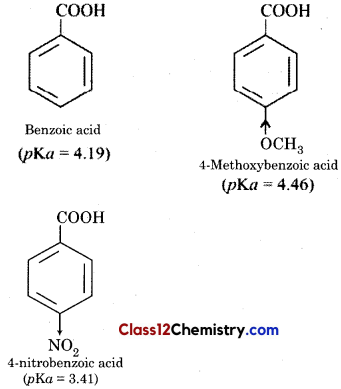